Here are All the New Products We’ve Introduced This Fall

It’s been a busy fall season at Digital Check, with FOUR new products released in October and November. Some of these are updates to (or replacements for) existing models, while others are brand-new products altogether.

To help keep things straight, we’ve compiled a summary of all the additions, subtractions and changes that have happened recently.

This update solves a big problem for banks that may be looking to move their branches to a networked virtual environment one day: If we buy ordinary scanners today, will we have to replace them all with network-enabled scanners tomorrow? Network-enabled scanners only work over a browser-based Ethernet connection; normal scanners have trouble working in virtual network environments. For many banks looking to make the switch, the only option was to replace both the hardware and the operating environment at once.

The new Expert Elite model takes care of that by being compatible with both setups. It starts out as a traditional, USB-connected scanner, but can be converted to a network-enabled, Ethernet-connected scanner with a one-time firmware upgrade. (Since a bank is only going to switch its operating environment once, there is no need to switch back.)

We expect this new capability to be very useful for any bank that is going to switch to a virtual environment in the future but isn’t there yet. No more waiting in limbo to buy new equipment, or spending money on hardware that’s going to be replaced.

Keep in mind, the TellerScan and CheXpress lines have a slightly different solution to this problem in the SecureLink network attachment. This external device connects to any new or existing TS240 / TS500 / CX30 device and gives it Ethernet capability, a separate twist on the “buy now, upgrade later” idea. 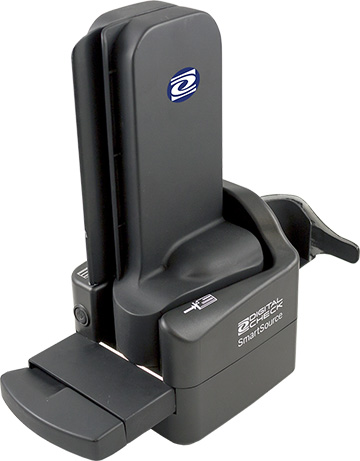 Due to overwhelming demand, we came up with a compact scanner that can capture checks together with other documents up to a full-page 8.5” x 11” size. The Micro Adaptive is based on our original SmartSource Adaptive – a much larger, multi-feed device that can scan at up to 100 documents per minute.

The Micro Adaptive is a single-feed device designed for much smaller workloads, takes up much less space, and is available at a fraction of the cost. It is perfect for any business where payments and other related documents – invoices, insurance forms, identification, or anything else – need to be kept together for other purposes after the payment itself is made.

Some of our first Adaptive customers were in South America, where utilities, mobile phone carriers, and government agencies often issue bills with scannable bar codes tied to the customer’s account. These boletos, as they are called, were a great reason for developing combined scanners in the first place, but the number of potential uses for them is nearly limitless.

It’s important to note the advantage of a full-page check scanner over a regular flatbed scanner is that it has a magnetic reader that captures the MICR numbers at the bottom of checks. Without this ability, it is much easier for errors to make their way into the deposit workflow – and many banks don’t even want to accept scanned checks without a magnetic MICR line. Without a device capable of doing both MICR and regular documents at once, many customers were using separate scanners, one for checks and one for the accompanying documents. Besides taking up more space and being more expensive, it could also be difficult to keep the captured images together in the same transaction after the fact. The Adaptive and Micro Adaptive bring together solutions for all these problems in one package. 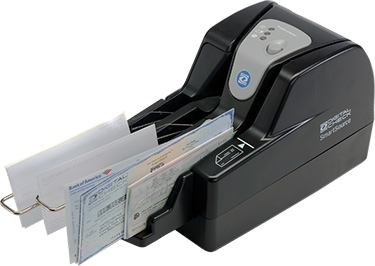 Having made its debut in 2007, the SmartSource Professional is one of the longest-serving models in our lineup, but it’s undergone extensive improvements over the years to keep it up to date with the latest technology.

The most recent improvement was an upgrade to 200 documents per minute (DPM) – a 67% increase over its previous top speed. This puts it on par with the heavy-duty branch scanners used to capture batches of hundreds or even thousands of checks at once. The SmartSource Professional is also one of the few desktop check scanners on the market with two-pocket sorting capability; recent advances have allowed it to keep that same top speed, even with the sorting function turned on, a rarity among devices of the past.

Previously, we had discontinued all single-pocket models of the SmartSource Professional except for the 120 DPM version, as well as ending production of the 30, 55, and 80 DPM versions in two-pocket configuration. This has solidified the Professional’s main purpose as a high-end, bulk-capture device with sorting. 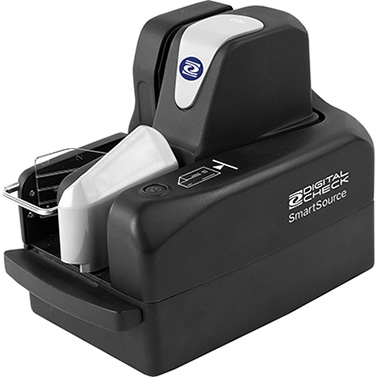 This is our most affordable multi-feed scanner, intended mostly for higher-volume remote deposit capture (RDC) users. It employs the same chassis as the existing SmartSource Merchant Elite, but incorporates several new features, as well as general updates to its internal components and electronics.

Most notably, the Elite 55 introduces Serial Embedded (SE) technology, which means it has a built-in CPU that runs the API and handles basic image processing and compression. This makes it much easier to use across different operating systems and software packages – in other words, much closer to a “plug-and-play” installation out of the box than other check scanners. This is especially well suited to RDC customers, who might have virtually any configuration in place on their PCs.

Additionally, the Elite 55 includes an inkjet printer for physical endorsement on the backs of checks – a sought-after feature in the aftermath of the new Reg CC updates that took effect in July 2018.
At release, the SE model of the Elite 55 will be the only configuration available.