Reader/Sorter machines were unmatched in check scanning speed and precision — but they’re not made anymore, and the few that remain are at the end of their lifespans.

The Quantum DS was made to take over from full-sized reader/sorters, combining high speed and sorting capacity in a more compact frame, and at a much more affordable price. 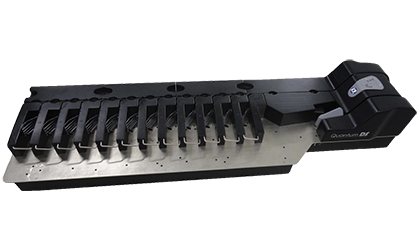 For full-sized reader/sorters, the show’s almost over …

For those who use these massive machines, the age of “Big Iron” is drawing to a close. They’ve been out of production for years, and most reader/sorters today are in their second or third decade of service. Finding parts and service for them is getting very difficult.

The major manufacturers declared end-of-support dates in 2020 — now pushed back to 2021 in response to the pandemic — but the end of the road is still coming up fast. Soon, OEM components and repairs won’t be difficult to get; they’ll be all but impossible.

… but the Quantum DS is still in business.

When production of full-sized reader/sorters started winding down, we saw the need for something to replace them. There’s still a demand for high-volume sorting, but not at the size and price tag of the machines that were doing the job previously. That’s why in 2013, we developed the Quantum DS as a mid-sized reader/sorter relacement that handles the most important functions of its predecessors at a much more reasonable price.

Prior to 2016, Digital Check’s SmartSource team was a division of Burroughs, Inc. — an original manufacturer of full-sized reader/sorter machines, including the Burroughs Quantum and the Quantum NDP series. The Quantum DS was based on the lessons learned from those platforms, and even engineered by many of the same people. It is the successor to the reader/sorters of the past both in function and in spirit.

Simpler to Use, Lower Cost of Ownership

If you’ve ever seen a full-sized reader/sorter, you understand why people can’t just learn how to use them on the fly. In our case study on reader/sorter usage in Mexico, the head of the country’s largest check processing company says it takes an average of three weeks of training before an employee can operate one of the big machines. Not only does that cost almost a month’s salary to get the operators up to speed; it also usually means there are a limited number of staff who can use them.

Take a look at the machine on the right — it’s actually one of the smaller reader/sorter machines ever made. But at more than 10 feet long and weighing in at half a ton, if you ever need to send it in for maintenance, it’s not going anywhere. For these “Big Iron” machines, maintaining them means regular in-person visits by a highly trained technician.

Since this type of service is so specialized, most reader/sorter owners have annual maintenance contracts that run in the tens of thousands of dollars. (Our main customer in Mexico reported it cost him more than $30,000 per year, per machine to maintain.) In fact, the cost of a reader/sorter maintenance contract is usually much higher than the purchase price of a brand-new Quantum DS — every year! 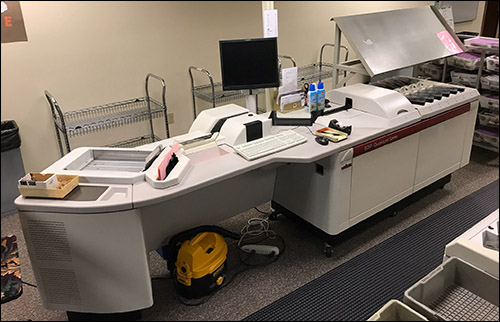 Availability for Years to Come

That smaller scanner to the right of the Quantum DS (not to scale) is the SmartSource Professional. It’s one of our longest-running check scanners in production, and it just recently received a new round of updates to keep it up to speed with the rest of our lineup.

Why is that important? Because the Quantum DS shares many components in common with the SmartSource Professional. That’s a good thing for both of those models — and for the people who own them.

One of the big issues with full-size reader/sorter machines is that the parts they use aren’t quite like anything else. To reach such high speeds and precision, they need special components that are machined down to an accuracy of hundredths or thousandths of an inch, and are made JUST for reader/sorters. That makes them both expensive and hard to find. Since the Quantum DS shares “off-the-shelf” components with mass-produced scanner models, they cost the same as regular scanner parts, so you won’t have to empty your wallet for a set of spares.

Longevity and Peace of Mind

The other problem for reader/sorter owners is that the parts are so unique, there’s no place else to get them. Once the original manufacturers stop making replacement parts in the near future, those are the last spare parts there will be. While those devices went out of production years ago, both the Quantum DS and the SmartSource Professional are in active production, and we’ll still be making parts until BOTH are retired. Our maintenance policy also guarantees that service and components will remain available for six years after a model goes out of production.

Since the Quantum DS is designed to replace older full-sized reader/sorters, we’ve made sure it’s compatible with the Quantum series machines. You should be able to use it with minimal or no application changes. Contact us for details.

The 12 exit pockets on the Quantum DS can be used to sort scanned items using the MICR information encoded at the bottom – or they can just be for extra capacity. As seen in the example at left, once one pocket fills up, the Quantum DS can direct scanned items into the next one, giving the device a capacity of thousands of items at a time. Full pockets can also be emptied while the machine is running, meaning it can keep going indefinitely as long as an operator is there to keep feeding and removing documents.

The only thing as big as the difference in cost between a Quantum DS and an old reader/sorter is the size of the machines themselves.

A reader/sorter is literally the 800-pound gorilla in the operations room. It needs dedicated people, a dedicated budget, and even its own designated space. At around 4 feet long, the Quantum DS isn’t exactly a small machine, but it was designed to be used on a desk or a tabletop, and moving it isn’t like moving the furniture. You won’t just save money; you’ll save a lot of space too. 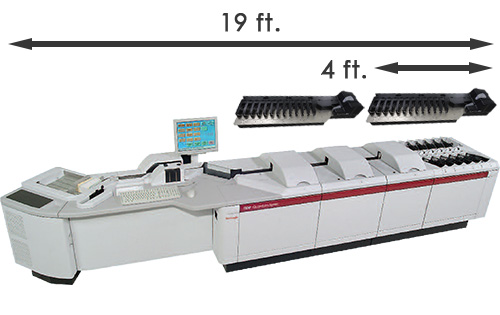 User Manuals and other documentation can be found at this device’s product support page.