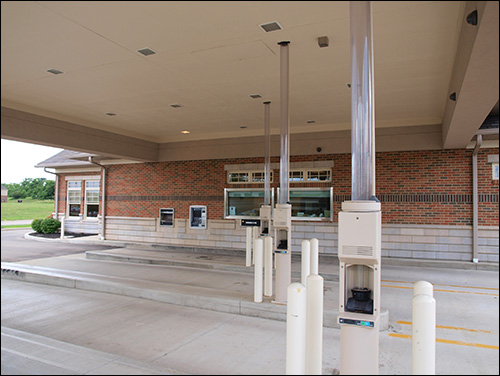 Many had predicted the demise of drive-thru banking lanes until recently, but the COVID situation has at least temporarily restored their popularity.

Among unusual events that took place in 2020, the resurgence of drive-up banking might not be the first that comes to mind. Nonetheless, one of the myriad unexpected reverberations from the COVID pandemic was that it made banks and credit unions all over the country reconsider their plans around this aging – some might even say antiquated – bit of branch technology.

The use of pneumatic tubes at many of these drive-up locations might justifiably evoke flashbacks to the 1950s, or to outdated sci-fi movies. But, as a means of limiting face-to-face contact, at a time when that was highly desirable, they proved remarkably effective. Consumer behavior changed significantly enough over just a few short months that the industry took notice, and many financial institutions that had planned to phase out their tube systems reversed course and decided to hang on to them for the foreseeable future, or even to expand their deployment.

You might wonder what any of this has to do with check scanners, magnetism, or anything that could possibly cause a machine to misread a piece of paper. It IS pretty weird that there would be any connection between those things, after all. Still, over the years, we have encountered a surprising number of cases in which bank branches would be having serious misread problems with a single scanner, and that scanner was invariably located at the teller station with the drive-up tubes. What was going on?

If you were to take apart your check scanner (please don’t; it will void the warranty), you’d see that it uses two separate instruments to capture the information off a check. The most obvious are the image sensors – industrial camera-like devices that pick up the visible light to get an image. Less noticeable is the MICR read head, which typically sits right near the start of the paper track, and captures the numbers encoded in magnetic ink at the bottom of the check. In order to do this, it first imparts a magnetic charge to the ink, then reads the intensity of the magnetic signal given off as the check passes by at a fixed rate. And this process, it turns out, is extra-sensitive to electromagnetic interference, or EMI. 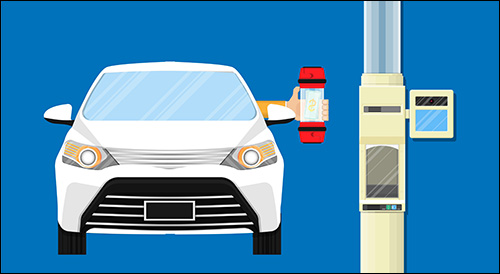 You might think that passing items through a pneumatic tube generates static electricity — which is true, but that’s not what can cause scanner interference.

So, back to the pneumatic tubes. The first thing that comes to mind for many people is that the passage of a capsule through the plastic tube system must generate a lot of static electricity, which then causes interference. But this is only half true: While pneumatic systems can and do accumulate static electricity, that’s not what causes the problem. Static generally only creates EMI when it discharges, in amounts too weak and brief in duration to cause a scanner problems.

The air pressure that makes the pneumatics work, though, has to come from somewhere, and that’s from an electric motor that is generally inside the building – right under the counter where the tube ends. To power a bank-sized tube system, it might take a motor that draws 12 or more amps and generates 1.5-2 horsepower, similar in size to a pool pump. That’s probably as big a source of EMI as you’re likely to find at almost any retail type of setting.

We’ve gone on-site at bank branches and measured the EMI from pneumatic tube motors, and found it’s quite capable of scrambling a scanner’s MICR signal at distances of 18 inches (where the EMI intensity is only about 10%-15% as high as it is directly next to the motor). So, if the motor is under the counter, your scanner is probably right on top of a huge EMI source, and should be moved at least an arm’s length away. Fortunately, it doesn’t cause any permanent damage, and moving the device away from the motor will make it run good as new!

It’s worth mentioning that most newer pneumatic systems come with motors that include more shielding against EMI, so it may be possible to get away with having a scanner near one, as long as the shield does its job without fail. Older systems built around the turn of the millennium and before tend to experience a higher rate of problems. 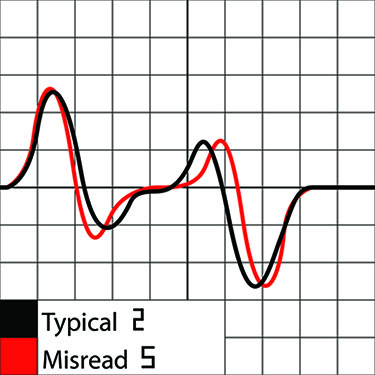 Certain characters in the E13B font give off magnetic signals than can be confused with each other if electromagnetic interference distorts them in an unlucky way.

So, an electromagnetic field can “interfere” with the operation of a scanner by scrambling the signal. What does that actually do? One of three things, which can range from mere nuisances to grievous errors.

Most often, when the scanner picks up a garbled MICR signal, it will throw off a can’t-read error, which is exactly what it sounds like. The scanner stops and a message tells the operator to scan the item again or verify the numbers manually. Except in rare cases where the teller then makes a mistake, it takes a few seconds of his/her time, and that’s as far as the problem goes.

Sometimes, we’ll see a didn’t-read error, which is similar to a can’t-read, except that the check makes it into the clearing queue and comes back rejected later. This might require someone to find and re-scan the original document, or other types of “Day 2” processing.

In the worst case, there will be a misread, which is the one that can cause serious problems, like wrong account numbers. Misreads are when the machine reads one character as another – for example, a 2 is read as a 5, or a 7 is read as a 9 – and it generates no error because it thinks all the characters are legitimate.

How is it even possible to make a mistake like this? After all, they’re different numbers! Well, as we explained in a previous article about how MICR reading works, the machine doesn’t “see” the numbers, just measures how much ink is present in each tiny vertical “slice” from left to right. The result is a “wave” pattern, and by unfortunate coincidence, some MICR numbers share very similar patterns. Electromagnetic interference acts on these waves at random, and so all it takes is a little bit of bad luck for a customer to suddenly be missing $1,000 from his account because of a check he didn’t write. (We’ve seen this happen – in fact, it’s usually the reason why the bank calls us about the pneumatic tubes in the first place!)

An unfortunate footnote is that the capability does exist to catch most of these misread errors – in fact, the technology is standard issue with every check scanner and core banking system. It just isn’t often used. 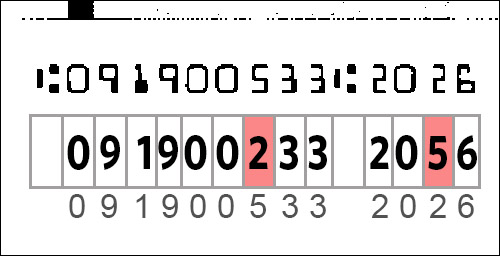 In this example of a MICR-OCR mismatch, the actual printing on the check (top) is misread by the magnetic sensor due to interference (middle), but character analysis of the visible-light image (bottom) can be used to catch the mistake. This document would be flagged for review because the magnetic and visible data do not match.

Since a scanner captures both a visible-light image and a magnetic reading of each check, it’s definitely possible to take the visible-light image, read the numbers using Optical Character Recognition (OCR), and compare them with the magnetic readout. If they don’t match, a MICR-OCR mismatch error is generated, and the check is flagged for manual inspection.

Of course, no technology is without its own set of issues, and MICR-OCR comparison is no exception. Here’s why: A decent accuracy rate for the MICR reader in one of our check scanners is around 99.7 percent or more. A very good read rate for standard OCR might be 93 or 95 percent. So, if strict MICR-OCR cross-checking is turned on, the scanner will stop with false alarms quite often because of the lower accuracy on the optical side. This would happen several times in each stack if you are scanning in batches, which is neither practical nor an acceptable user experience.

The result is that most banks have backed away from making full use of this technology. They might not turn off MICR-OCR comparison entirely, but most of them will loosen the OCR settings enough that the scanner keeps running unless there is a gross error. For example, at a lower OCR confidence score, a 9 and a 7 printed in E13B (the standard font for MICR encoding in North America) just might look similar enough to pass through.

It should be mentioned that, under most circumstances, this setup works just fine. But when there’s magnetic interference playing havoc with the MICR readout, that’s when real problems can happen.

Other Sources of Trouble 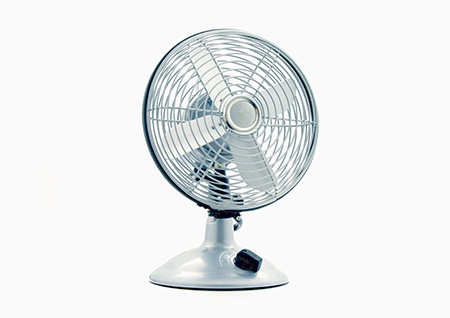 Your scanner won’t be a fan of the electromagnetic interference from several common desktop appliances. Get it — won’t be a “fan?” Sorry.
(photo: Enrique Zafra)

As you’ve probably surmised, it’s not just pneumatic drive-up tubes that can disrupt a MICR readout; it’s anything that generates a significant electromagnetic field. Devices with motors in particular are the big troublemakers, but conceivably, anything with resonant resistors could be a source of EMI.

Laptop power bricks, desk fans, and other seemingly benign devices have all been responsible for MICR malfunctions in some of the cases we’ve seen. Back before flat-screen computer monitors were widespread, big CRT tube monitors were another significant source of trouble if a scanner was placed too close, but this issue has largely gone away as more efficient flat screens have taken their place.

One more type of device that remains a challenge is the portable space heater. Especially in colder regions of the country, tellers at drive-up windows (the ones in the wall of the building, not the ones with tubes) will often keep space heaters at their stations to combat the blast of subfreezing air that rushes in every time the window is opened. Besides consuming a huge amount of electricity, these heaters will often include fan motors to circulate the warm air, leading to EMI issues if the scanner is too close.

The most egregious example of EMI trouble that we’ve ever seen occurred at a manufacturing plant where heavy electrical transformers were made. We got a call complaining that two of their scanners had stopped working entirely, and after being unable to troubleshoot them, we sent a team of technicians to investigate.

As it turned out, the accounting office at the plant was right next to the test lab where giant transformers were being fired up regularly. One of them had generated such an intense EMI burst that it actually scrambled the scanners’ ROM chips and wiped the firmware. (This is the only time we’ve ever seen that happen!) We were actually able to revive the scanners by re-flashing the firmware – and naturally, we recommended they be moved to a different room.

At the start of this article, one of the first things we talked about was the theory that drive-up lanes can interfere with check scanner MICR reading by building up a static charge in the pneumatic tube. While this is not the reason for any of the EMI-related issues we discussed here, we do occasionally see other check scanning problems that are caused by static electricity. Click the link to read a short description of those issues.

Any cookies that may not be particularly necessary for the website to function and is used specifically to collect user personal data via analytics, ads, other embedded contents are termed as non-necessary cookies. It is mandatory to procure user consent prior to running these cookies on your website.