Do Only Old People Write Checks? The Effect of Age On Payments Habits

“The remaining lifetime of the check is directly related to the death rate among citizens over age 65.” 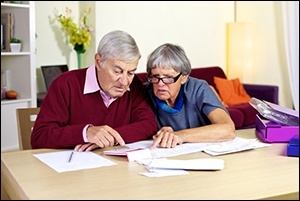 That comment from one of our overseas partners sums up a common perception of check usage in America, and for that matter, anywhere else. Paper checks are going away; they’re an archaic payment method; and the only ones still hanging on to them are those too set in their ways to take advantage of new technology.

While there’s undeniable evidence that check usage in America is declining, we wondered whether the common assertion about the role of age is myth or reality. In a recent white paper titled The Disappearing Check: How Long Until the End?, we spent some time investigating the real effect of the population’s age on check writing behavior.

If you examine the overall usage of checks over the past decade, you’ll notice that checks are not disappearing at an accelerating rate – another common myth – but at a linear rate that takes them straight to zero in about the year 2021. From 2003-12, checks decreased by half, from 36 billion to 18 billion, with the rate never wavering much from about 2 billion per year.

Whether we really reach zero checks by 2021 is not our concern here. What’s important is that if age is the primary factor in checks’ usage, we should expect their decline to be closely tied to the death rate. Statistics from the CDC put that at 4.4% per year for the over-65 age group, so by 2021, we could expect over 60% of senior citizens alive in 2012 (when the Federal Reserve Bank conducted its most recent study on payments usage) to still be alive and continuing to hold on to their check-writing habits.

Looking at the previous 9-year period from 2003-12, it is tempting to use the expected death rate (39.6%) to explain more of the percentage decrease in check writing (50%), though that would still leave over a fifth of the decline unaccounted for, while assuming that no one under 65 wrote any checks at all.

If Not Age, Then What?

The numbers suggest that the habits of senior citizens aren’t singlehandedly keeping the check alive (and, conversely, their deaths aren’t solely responsible for its decline). So, what else is at work? For answers, we turn to a 2009 report, Why Are (Some) Consumers (Finally) Writing Fewer Checks: The Role of Payment Characteristics, which takes a hardcore mathematical approach to solving the same problem.

Among other things, the study found that regardless of age, the main determining factor in whether a consumer abandoned the check was the number of other payment methods available as alternatives. Consider, then, that only 13 percent of the 60+ group has used mobile banking, or that those over 45 are less than a third as likely to have used Bitcoin as the rest of the population, and a solution appears to be taking shape.

But which are the payment methods that are replacing the check? “Credit cards and mobile!” is the tempting answer – but in fact, the Fed’s Payment Study shows that credit cards have remained steady at about 20% of all payments by number and 3% of payments by value for the past decade. The big winners that have replaced checks are debit cards for low-value transactions and ACH at the high end. (When considering forms of payment like online billpay and P2P services like PayPal, it’s important to remember that these are mainly branded forms of ACH and card transactions.)

Here, it’s no surprise that younger consumers lead seniors in adoption again – but not by as much as you might think. Debit card penetration among Generation X and Millennials is near-universal, but even as early as 2006, around 70 percent of seniors and 80 percent of the 55-65 group used debit as well. Similarly, online banking usage – a key indicator of ACH access – is only 47 percent among seniors, but that’s compared to just over 60 percent among the population in general.

Clearly, younger consumers gravitate toward electronic payments the faster, but it appears their older counterparts aren’t quite the technologically-bankrupt fuddy duddies we imagine. The 2009 Fed report suggests a third factor in play: The relative cost of writing a check increased by 30 percent over a decade ago, while its convenience compared to other forms of payment decreased.

The bottom line is that – while anecdotal evidence may seem to indicate that check usage and age are tightly linked – cost, convenience, and adoption of other payment methods are the real driving forces behind the decline of the check. Age may be a coincidental demographic symptom of these factors, or may even act as a modifier. But no one ever said, “I’m going to avoid checks just because I’m young,” or “I’m going to keep writing checks because I’m old.”

Read More →
January 12, 2023
Back to Blog →
PreviousMagnetic Interference: Why Your Scanner Isn’t a ”˜Fan’ of Desk Fans
NextWhat Goes Into Making an Apple Watch Banking App?