What Goes Into Making an Apple Watch Banking App?

By the time you read this, the latest Apple Event of the Century will be in full swing, with the new Apple Watch nearing the end of its first full week on the market. With it will come a slew of new or repurposed apps, including mobile banking apps. But, unlike in past launches of new “smart” devices like the iPhone and iPad, this time several smaller community banks will be among those launching their apps on day one – a feat previously reserved for the big boys of the industry. 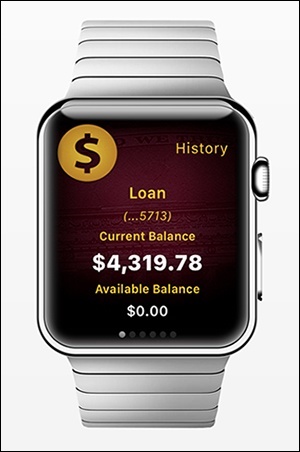 What’s different this time? They’re running similar versions of an app created by a company called Malauzai, which specializes in mobile banking for smaller financial institutions. The name of their game is creating basic mobile apps that can be easily (and inexpensively) replicated for use by community banks and credit unions, bypassing the custom work and lengthy integrations of one-off projects.

Not that it’s easy. We caught up with Malauzai co-founder Robb Gaynor and his staff a few days before the launch to talk about what it took to build an Apple Watch app, including dealing with some of the device’s unexpected quirks and Apple’s notorious pre-launch secrecy.

What’s different about building an app for a watch, as compared to a tablet or smartphone? Is it just the same app on a different screen?

In the first version [going from phones to tablets], that’s correct, it was a fork of existing technology. We basically had the same app and we were just dealing with different form factors. An Apple Watch app isn’t really its own app; it’s tethered to your phone. You download an app on your phone, it’s synchronized and it appears on your watch. We’re doing the most basic functionality of a phone app ported to the watch.

Besides the small screen, there are some other limitations on the Apple Watch – there’s no keyboard, for example. You do not log in to your watch or type, you just press buttons. So getting that to work with mobile banking was a bit of a challenge.

You can’t type or log in? How can you do mobile banking without that?

Getting their balance and looking at transaction history are the most frequent things people do in mobile, in online banking, and probably the watch. These are quick logins where they are not actually doing any transactions. We have a “quick balance” feature on our mobile app that lets you get your balance without logging in, and almost 1 in 5 visits for the banks that have it are these quick balance inquiries.

We had to ask about the watch, “What is it particularly suited for?” and it’s these kinds of quick actions. You can use it to make a phone call, but you’re not going to want to hold up your arm and talk into your wrist for 20 minutes. So the first version of the watch app has these quick functions that don’t require a login. For the second version, we think our engineers have figured out a few ways that you can log in and use more of a full mobile banking account.

Speaking of logins and passwords, security is a big issue that comes up every time there’s a new device. Has that been a big concern with the Apple Watch?

The watch itself does require the phone to be functional – it doesn’t work if it’s not connected by Bluetooth to the phone. So you can’t take someone’s watch and have access to their bank account. I suppose you could try to hack the Bluetooth connection, but they have ways of securing that too. Security has not been a huge worry. [Some things are] unknown because it’s not tested out in the wild at all. But the watch is really a second screen for your phone.

How does development and testing go for a brand-new product that hasn’t been released yet?

Well, we haven’t tested this yet because there’s no watch yet. You do worry, “What if it doesn’t work?”

I shouldn’t say we haven’t tested it at all. We’ve got programmers up in Sunnyvale working on it with the actual product. Apple allowed us to come up [in the week before the launch], and our people are working in their locked, secure labs. You worry, but it’s a unique opportunity to launch the day Apple launches – a once-in-a-lifetime opportunity.

Do you have any sense of what kind of adoption you’ll see with smart watches? Apple will probably sell out of them because they’re Apple, but is this going to be the next big thing like smartphones, or a fad?

What we know is, if someone has an Apple Watch, they’re going to use it. There’s a high correlation between owning and using. So the people who own a watch are going to be more engaged, and this will be a killer app for them.

The benefit [to a bank] is tangible sometimes. You can get recognized – one of our clients got on the news – and people notice. It does affect your image positively, and it’s fun to be first; there’s goodwill created all over the place.

Let me put it this way: I haven’t worn a watch in 20 years, but guess who’ll be wearing one next week?