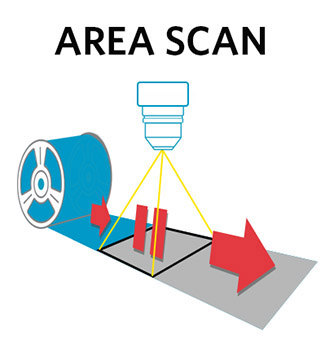 An area scan, or area array, camera is designed to take still photos of a 2D area. In this example illustration of a microfilm reader, the film would need to stop underneath the camera each time a picture is taken.

An area scan, or area array, camera is what most of us would call a “regular” camera. It uses a single exposure to capture an image of a 2D area all at once.

This type of device approximates the analog process of taking a picture with a film-based camera – however, modern digital devices are so called because they use an array of sensors to assemble a 2D image of an area. This contrasts with line scan devices, which use a single row of sensors to capture single-pixel “slices” in rapid succession, and then reconstitute them into a full image.

The practical difference between area and line-scan devices can be summarized as: Area arrays are better suited for cases in which both the camera and the subject are stationary; while line-scan sensors require either the camera or the subject to be in motion. In scanning, this means that line-scan technology is usually the better choice, because it can continuously capture documents as they move past, whereas an area array device (unless it used a very high-speed camera) would need the document to slow down or stop in order to capture a good image without blurring.

Check scanners in particular use a special type of line-scan technology called a contact image sensor, which is designed to capture line-scan images at extremely close distances.

For a more complete comparison of line-scan and area-array technology, see our article on the subject here.