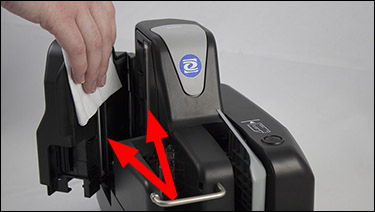 A check scanner typically uses two sensors to capture an image of the document as it passes through – one for the front of the check and one for the back. These are often referred to colloquially as “cameras,” although the more accurate name for one is a “Contact Image Sensor,” or CIS.

What is a contact image sensor, or “CIS?” And just as importantly, why should you care?

Well, if you have a check scanner, you should care about contact image sensors, because you own at least two of them! You also might be interested in the difference between line-scan and area-scan technology, because it’s an important part of how machines like scanners can capture images of moving objects.

When people call our support desk for troubleshooting help, they’re often surprised to learn that the “cameras” inside their check scanner aren’t actually cameras at all. They capture images, but that’s about all they have in common with the kind of round-lensed cameras that we’re used to seeing in everyday life – for example, on smartphones. The technical name for one of those is an area array camera (sometimes also referred to as an area scan camera) so called because it takes a picture of a square or rectangular area all at once. But most of us would just call it a regular camera.

On the other hand, the image-capture mechanisms inside check scanners are industrial devices that most people wouldn’t — and shouldn’t — recognize as cameras at all. These are called line scan sensors, and they differ from regular cameras in that they don’t have a lens, and capture a single line of pixels at a time, over and over in rapid succession. A contact image sensor captures thousands of sequential one-pixel “slices” that it puts together to create a full image. Some people call these “line scan cameras” out of habit – but there is actually a further distinction between true line scan cameras and the even more specialized sensors found inside check scanners, which we’ll explain in a moment.

Our microfilm division at nextScan recently published a detailed article about the difference between line scan cameras and area scan cameras, which is highly recommended reading if you are interested in learning more about the benefits and drawbacks of each, and the challenges involved in using each one. In contrast to these two types of cameras, the contact image sensors found inside check scanners shares a few traits in common with a line scan camera, but with several important distinctions.

Most notably, a contact image sensor (as its name implies) is designed to capture objects that are in contact with it, or at very short distances. In contrast, a true line scan camera like the one you would find on a microfilm scanner is typically set back at a distance, and will use a lens to focus the light as the object passes underneath. The same is generally true for industrial line scan cameras that take pictures of 3D objects from a height.

To summarize: A contact image sensor uses line-scanning technology to capture one row of pixels at a time – but it is not the same thing as a “line scan camera.” And neither of those two are anything at all like a regular, or area-scan, camera.

So, why does a check scanner use these specialized contact image sensors instead of regular (area scan) cameras? One reason is because it saves a lot of space. On the diagram above, what do you notice about both cameras? They each have a field of view that gets bigger, the further away the camera is from the object that it’s trying to photograph. Put an area scan camera right up against the paper, and you would need to take an extremely wide angle photo. What’s more, in order to capture a check in a single shot, you would need a straight, flat surface the size of the check itself — you couldn’t start capturing an image while the trailing edge of the check was still going around the corner in the paper track. A contact image sensor doesn’t need any setback distance, and the one-pixel continuous capture means the physical length of the document isn’t an issue. Both of these characteristics are ideal for fitting the CIS into compact spaces.

There’s another, even more important, reason why regular cameras aren’t used in checks scanners. In order for a typical area scan camera to properly photograph an object, the object in question has to be stopped, or be moving very slowly; otherwise, the resulting image will begin to blur. Starting and stopping the feed motors each time a check was captured would slow down the top speed of the scanner dramatically. And, you would still need the same long, flat area in the scanner track. So, imagine a check scanner that’s twice the size of your current one, and which runs at a quarter of the speed, and you’ll understand why we use contact image sensors with line-scan capability instead.

The streaks on this sample check image are caused by two individual smudges on the glass above the contact image sensor, or CIS.

What’s the most common reason why this comes up in everyday life? Mainly, it’s when customers call in to report unusual “streaks” or “stripes” that run across the entire horizontal length of their check images. There is usually nothing more to this problem than a plain old smudge or a speck of dirt on the glass covering the sensor. However, because a check scanner uses a line scan sensor, the speck doesn’t show up as a single spot – it’s repeated on every one-pixel “slice” of the image as the check is dragged through. The end result is that the dirt comes out looking like a line instead of a dot.

If you’re not familiar with line scan cameras or contact image sensors, this effect is often enough to make you think there is something seriously wrong with your scanner. Most of the time, though, all it means is that you need to wipe off the glass!