What Will the End of the Check Look Like? We Discuss with banking.com 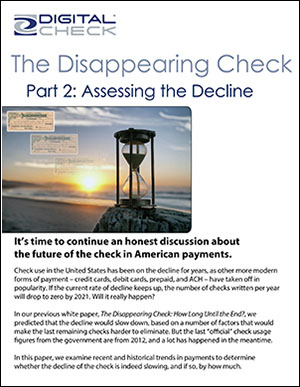 Everyone knows that the number of checks written each year is falling – but how much longer will they last, and what will the eventual phaseout look like? Last year, Digital Check began investigating the decline of the check and published a set of white papers on these topics. The response we received was tremendous.

In April, we discussed our findings and follow-up with banking.com, including that:

For Digital Check’s original white papers on the end of the check, follow the links below:

The Disappearing Check: How Much Longer Until The End?

The Disappearing Check Part 2: Assessing the Decline; and Part 3: Predicting the Endgame

Read More →
January 12, 2023
Back to Blog →
PreviousProcessing Cash and Checks Together in the Vault? Introducing Vault by Digital Check®
NextSupport Tips: Clearing Paper Jams on the CheXpress CX30