Scanning full images of driver’s licenses and ID cards not only speeds up workflow processes, but holds promising applications for security

Scanning ID cards at the teller window opens a whole new realm of possibilities for banks and credit unions. There are lots of things you can do with a captured image that just were not possible with traditional magstripe technology. But where should a financial institution start?

Linn Area Credit Union set out to implement ID capture several years ago with a simple goal in mind: Speeding up the workflow and improving information retention on long-form applications such as account openings. Along the way, it learned a lot about various applications of the technology – as well as about hardware compatibility. Since ID scanning devices were not “mainstream” peripherals for branch networks until rather recently, getting the hardware itself to run smoothly had presented a long-standing challenge until it began to be integrated with check scanners.

As Linn Area discovered, there’s no one “right” answer for how to use ID scan technology, but chances for operations improvement are all around. The credit union had already been using standalone ID scanners for years by the time it decided to undertake a major overhaul of its teller hardware and software in 2019. That project presented an opportunity to iron out the wrinkles in the ID capture process as well.

According to Rich Head, Linn Area’s VP of Information Technology, a major technical issue with the ID scanners was one that is common among USB devices plugged into thin-client workstations. 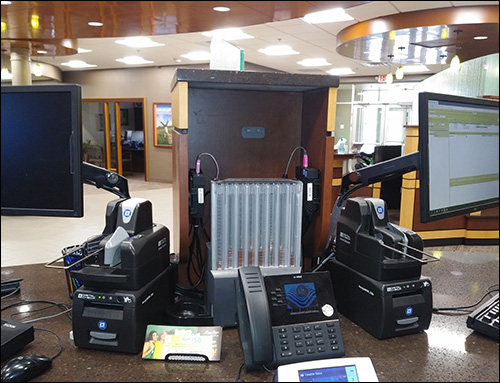 When replacing teller hardware as part of a core system overhaul in 2019, Linn Area Credit Union opted for SmartSource Elite check scanners with ID capture built in, rather than standalone USB-connected ID scanners.

“When we were looking at our options, we knew right away that we did not want to continue using USB-connected ID scanners in our network environment,” Head says. “You don’t use the ID scanner as frequently as some other teller peripherals, so it would go into almost a ‘sleep mode’ and not be recognized when it woke up. Staff would have to unplug and reconnect it every time.”

It is not unusual for one of two extremes to occur when a device designed for a USB connection is driven over a network: Sometimes, repetitive network calls to keep a device active can bog down the system. Or, (as in Linn Area’s case), once a device is dropped, the network may not know where to “find” it again.

So, when Head and his IT department were shopping for teller hardware, a check scanner with an ID card reader already built in held natural appeal. Not only did it solve the card scanners’ connectivity issues by “piggybacking” on the scanners’ – simply reducing the number of devices being used provided benefits of its own.

“It’s not only having one less piece of equipment at the teller station,” Head explains. “If you’re capturing someone’s ID for a new account opening at the teller window, that ID record is already in the system when they go to the office for the full account opening – there’s no need for another capture device there. Under some teller capture systems, each location with a device is an additional license, so it pays to simplify your process.”

How does Linn Area use its captured ID images? Head says his team has considered several options, but for now, they’re the most help when doing business with new members or with at-large customers.

“We’ll mostly capture information from the card into our core system when a new person walks in. The teller initiates a new member record, and the capture app pre-fills it with everything it can capture through OCR or the barcode,” Head says. “It crops out the ID and saves it to the core system, and then copies the data into the system as well, so that the ID record is there when the person goes to the office to complete the account opening.”

“The other situation where we’ll capture an ID is when a non-member comes in to cash a check,” he says. “Our application creates a person record – not a member record – so we know who this is. It fills in the information and saves the captured picture. Compare that to the old days, back when you’d write a driver’s license number on the front of the check!” 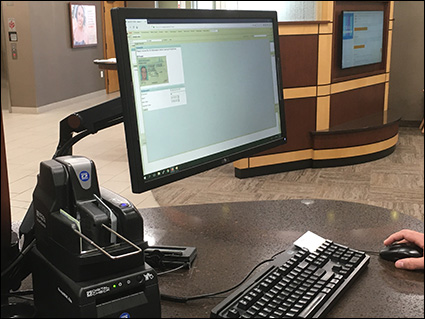 Linn Area CU captures an image of the member’s ID using a check scanner, and key information is automatically populated in the teller system.

While Linn Area hasn’t implemented them yet, Head says his team has considered the anti-fraud implications of ID capture for everyday transactions. It may not be worth running extensive verifications or full background checks each time a member comes into the branch, but some intermediate steps might be practical.

“Its kind of a crawl-walk-run process for us,” he explains. “Right now, we’re mainly capturing IDs for the improvement it brings to our own processes – but there would be nothing stopping us from adding some basic security tests. For example, does the barcode data match what’s printed on the front of the ID? Is it a valid license number, or a valid format? Those are some things we might be able to run locally, without connecting to an external database, which is a key issue for teller transactions.”

Another change happening in the realm of ID capture is the implementation of the federal Real ID Act, which formally takes effect in October 2020. Among the requirements of that law are certain standard features that Head thinks may be helpful anti-fraud tools for financial institutions in general, even if his own credit union doesn’t encounter them often.

“Out-of-state IDs are not a big issue for us, because it’s hard to meet our membership requirements from another state,” he explains. “But it might be if you’re a regional bank with branches across several states. Under Real ID, the format of the front of the card isn’t the same from state to state, but the barcode is standardized nationally – so it’s helpful to have something that’s consistent across all formats and all states.”

In the future, Head says, it will likely be beneficial for most financial institutions to incorporate some form of ID recognition into their processes, even if they’re not capturing ID cards at the teller window. His credit union, for example, has looked into technology that would allow members to add an additional layer of security by taking selfies on their mobile phones, which would then be compared against an ID on file. That type of system could become commonplace for high-value transactions or very sensitive processes.

“It is worth looking into to cut down on fraudulent applications, for example,” Head said. “We are fast approaching the point where more members will be initiating account openings online than in person.”