Goal: Transition from a standalone PC environment to fully virtual workstations at a local credit union; develop and maintain that environment through a core systems change.

Walk into a branch at Linn Area Credit Union, and you’re immediately met with a vision of the “Branch of the Future” – compact teller pods, open floor plans, and everything running on IP-based equipment.

That kind of sophisticated setup doesn’t materialize overnight. Without a suitable IT framework, some of the things they do are difficult, if not impossible. It’s a big reason why the Cedar Rapids, Iowa-based credit union was an early adopter of modern branch virtualization, and has steadily updated its hardware profile with network-ready workstations and peripherals.

Rich Head, Linn Area’s VP of Information Technology, has a message for those hesitating to make the jump: Don’t wait. It’s easy to look up at the mountain of technical challenges and be afraid, but the slope isn’t as steep as it seems, and the payoff for reaching the top is immediate.

In fact, taking the plunge has enabled Head’s institution (Linn Area has five branches and around $500 million in assets) to do things you might expect to see at the biggest banks in America. There’s no reason why a local credit union can’t have a modern, connected infrastructure on par with that of their much larger rivals.

Among credit unions, Linn Area is likely one of the most experienced with virtual branch environments, having made the switch in 2012, shortly after Head started there. At that time, they had also recently implemented the teller pods – and running them from standard PCs was presenting some challenges.

“With the member-facing pods, our people are very mobile,” Head recalls. “They go to different spots during the day. Logging in and out of a different PC each time they moved to a new station was not really working.”

In a virtual environment, Head explains, the process of switching between workstations is much more fluid, since the terminals are essentially pass-throughs for applications running on a central server. Instead of the teller actively launching and shutting down programs every time he or she moves, the server simply displays them on a different terminal. The simplicity of that process was one reason why the teller pods were among the first workstations addressed in the virtualization project.

How difficult is it for a local institution to go virtual? 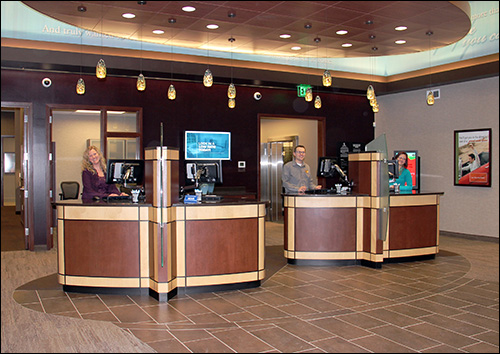 The lobby of Linn Area Credit Union’s branch in Marion, Iowa. The teller pods are all powered by a virtual desktop environment, using Digital Check’s modular SmartSource Elite series equipment for check capture, ID card scanning, and receipt printing all in one.

It’s all too common for regional banks and credit unions to put off the switch to fully networked branches because it looks like it could be too difficult. But if Linn Area is any example, you shouldn’t miss out on a great opportunity by getting caught up in the challenges.

“The technology can be intimidating, because it is hard – especially if you don’t have any dedicated staff,” explained Head, the information technology VP. “When I started here, we really didn’t have a lot of IT resources. We only had one guy doing IT as a system admin, nobody from a management level. It was basically a ‘keep things running’ mentality. I imagine that’s the position that a lot of these smaller institutions are starting from, but it doesn’t have to be as hard as it may look.”

The first things that Head looked at were the basics: Did the teller workstations all have the same hardware? Was everyone on the same software version? How old was the equipment? His team started with a relatively conservative plan to phase out servers and PCs that were three or more years old. That assessment led to a compelling realization.

“The ROI for this project was less than a year,” Head says. “You look at it and say, yeah, it’s going to cost you $30,000 up front, but then you look at what a physical workstation costs you – not just to buy, but to maintain – and it’s night and day, even without the side benefits.

“The cost savings on the physical equipment, of a desktop PC versus a workstation, is not that substantial; the total cost of ownership is where you’re spending your money. It’s not too hard to calculate the savings; some software vendors even have online calculators out there for that.”

Linn Area rolled out its virtual environment in stages, first by updating its servers and replacing the teller PCs with virtual workstations, then by expanding the thin-client environment to its general offices outside the member-facing area. Once those initial hurdles were in the past, the ongoing systems maintenance actually got much easier, according to Blake Rodemeyer, the credit union’s information systems manager.

“We just migrated the entire credit union from Windows 7 to Windows 10 without touching a single user’s physical machine,” Rodemeyer recalls. “If you had to manage that on desktop PCs, you can imagine how difficult that would be.”

Adds Head: “[A local institution] could still take on this project in-house; you would mainly need someone with experience in virtualization and Citrix. You could probably do the maintenance with one full-time employee once it’s up and running, and that’s not the only thing that person would be doing.”

How being nimble can be a big advantage 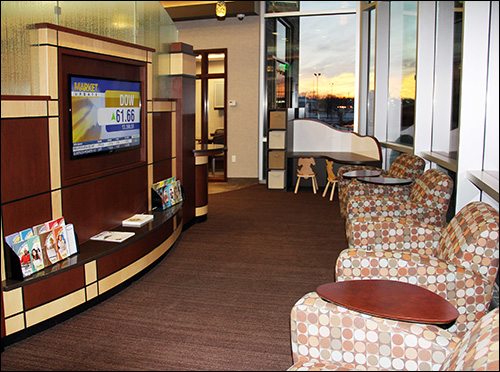 LACU’S Marion branch features a waiting area and other amenities that could easily be “Branch of the Future” concepts from the largest banks in the country.

In many respects, Linn Area’s size made its branch transformation easier to pull off, because a regional credit union doesn’t have to deal with some of the obstacles that would be faced by a much larger organization.

Working with the right vendors is also important. When Linn Area first went to virtual teller stations in 2012, for example, its core system didn’t include support for Ethernet-based check scanners. Because of the technical problems with using standard USB-connected scanners on a network (see sidebar), the credit union had continued to use back-counter branch capture. It was one of the few holdover USB devices that was not linked to the main virtual branch environment at all.

When Linn Area underwent a core platform change in 2019, it presented a chance to explore all the options. While networking capabilities were not the primary reason behind the core change (“It was overdue anyway,” says Rodemeyer), they were a consideration while selecting providers. Linn Area ended up going with a smaller, credit union-focused core provider, Corelation, in part because of their flexibility, and availability, to address virtualization needs. Ultimately, a vendor who is both reliable and well-versed in networking is a key to the process.

“You could achieve this even if you don’t have all the expertise in your own IT department. If you find a good vendor who’s done this before, they can hold your hand through it, and then it’s just using technologies that are already there,” Head says.

“Other people today should not have to face the same hurdles that we did” when Linn Area first virtualized in 2012, Head adds. “Five years ago, it may have been difficult to find a provider who could do this for you, but now it’s out there. It’s much easier on the server side now – a discussion about virtualizing the server is a 5-minute discussion instead of an hour. It’s the same with virtual desktops. It is not the same struggle to talk about anymore.”

It’s been well over a decade since Digital Check introduced its first modern network-enabled check scanner – the SmartSource Expert – and its more niche predecessors have been around for longer still. Toward the start of that period, financial institutions understandably had real concerns about things like compatibility, network uptime, and who would have the technical knowhow to run it all. Those days are long past, and as Linn Area’s experience shows, if you’re thinking about making the move, there’s a lot less to be afraid of.