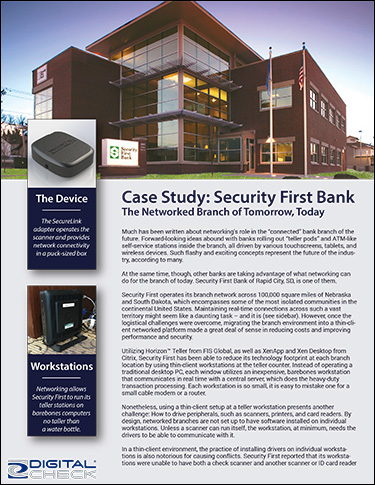 Northbrook, IL, November 16, 2017 – Digital Check Corp. has released a new case study detailing the use of scanners, receipt printers, and other teller equipment in a fully networked branch environment. The study follows the story of Security First Bank, a regional financial institution based in Rapid City, S.D., as it updated its teller workstations and brought its frontline peripherals onboard to the network fold.

Security First was an early adopter of Digital Check’s SecureLink networking device, using it in conjunction with the TellerScan TS500 check scanner and Teller Transaction Printer. SecureLink is a self-contained 3”x4” device providing all the computing power needed to run the scanner, as well as a network interface to accept commands from teller workstations. By removing the scanner drivers and processing power requirements from the bank’s own computers, SecureLink solves compatibility issues, making peripherals run seamlessly in a network environment.

“Historically, getting countertop devices to operate over a central network has presented a major challenge for banks, even when the workstations themselves are running smoothly. It’s not plug-and-play,” said Henry Coffman, Digital Check’s North America channel manager, who oversaw the Security First installation. “With SecureLink, we’re able to isolate the software and drivers that can cause compatibility issues, and remove those from the network.”

Despite doing business across a footprint of 100,000 square miles in rural South Dakota and Nebraska – encompassing some of the most remote regions in the continental United States – Security First has been operating fully networked branches for years. While maintaining “always-on” connections across such a broad expanse of territory seems like a daunting IT challenge, the bank has experienced almost no issues in over a decade since it moved its branches online. It even operates the network-connected “Badlands Express,” a traveling two-teller branch on wheels, across South Dakota’s Native American reservations.

“Many people wonder whether it’s practical or cost-effective for smaller banks and credit unions to use networking, and Security First has provided an excellent example of how to do exactly that,” said Rick Ooten, Digital Check’s vice president, product management. “The networked branch does not need to be the branch of the future – it brings huge benefits even for regular operations in the branch of today.”

The case study can be viewed here.