Magnetic Interference: Why Your Scanner Isn’t a ”˜Fan’ of Desk Fans

Summer is approaching, which means it’s almost time for an unlucky few scanner users to become frustrated by intermittent problems reading the magnetic ink at the bottom of checks, also known as the MICR line. That’s because as it heats up, more electric fans and similar devices make their way on to countertops around the nation, giving rise to an unexpected source of trouble from electromagnetic interference.

Just last week, we spoke with a customer at a bank branch who had called our support team multiple times over MICR readability problems, and replaced the scanner twice, only to have both new devices experience the same issue. Since the odds of three machines all developing the same problem independently are extremely low, we began looking at environmental factors, and – sure enough – a desk fan had recently been placed at that particular teller window. When the fan was removed, the problem miraculously cleared up.

Why do fans in particular pose such a threat to check scanners? It’s because the scanner uses a magnetic read head to pick up the signal from the magnetic ink that denotes the account number and bank routing number on your check, and outside interference can make the read head “see” things that aren’t there. Most of the time, the result is a string of nonsense characters – particularly the “@” symbol – that is either inserted into the account/routing number, or actually replaces some of the real digits. 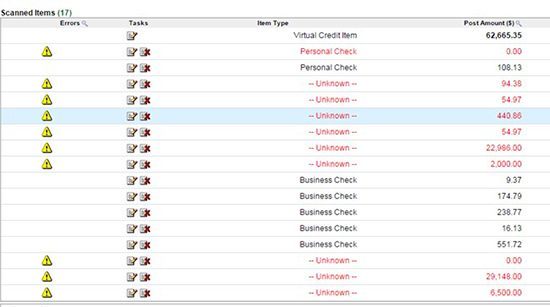 The read head in a check scanner actually comes in direct contact with the paper, and therefore does not need to be particularly sensitive – so it takes a pretty strong magnetic field to make one malfunction. Just about anything with a motor or a magnet in it can be a source of interference – fans, speakers, or old CRT (“tube”) monitors, to name a few – but fans tend to have some of the larger motors you’ll find on something that’s placed on a desktop, so they generate a stronger magnetic field, and hence more interference.

The good news is that as soon as the magnetic field is removed, the problem goes away, so moving or unplugging the offending device is all that’s needed. We’ve even seen cases involving oscillating fans where scanners have been unable to read checks while the fan blew one way, then briefly returned to normal while the fan rotated in the opposite direction (and the magnetic field moved with it). We recommend keeping any devices with motors, magnets, or large power supply units at least 12 inches away from the scanner, though this will vary from one situation to another.

Another, slightly different source of interference we encounter are the pneumatic tubes used by some banks at drive-up teller windows. They can produce enough static electricity to cause problems with the MICR head as well. In this case, if the scanner cannot be moved, simply putting a piece of aluminum foil between the scanner and the tube can create a shield that will resolve the issue.

A few other important things to know about scanners and electromagnetic interference:

Thanks for reading, and we hope we’ve been able to save at least a few readers the headache of dealing with a confusing problem to start the summer.

Read More →
November 3, 2022
Back to Blog →
PreviousNow Trending in Payments: Your Customers are Cheap
NextDo Only Old People Write Checks? The Effect of Age On Payments Habits