In the Groove: How Your Scanner Prevents Ink Smudges on the Image Sensor 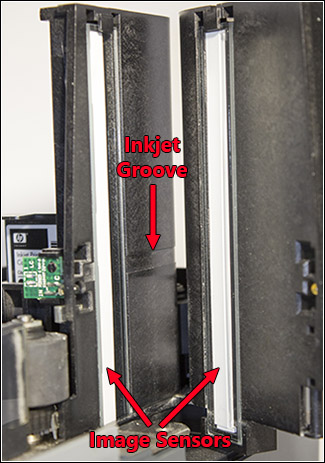 If you’ve ever opened up the inside cover of your TellerScan TS240 or CheXpress CX30 scanner, you may have noticed a shallow groove cut in the plastic image sensor housing. What is this groove, and what is it for?

Well, like most of the miscellaneous parts in these devices, it’s there for a reason, and there’s a story behind that. It so happens that the great majority of the scanners we sell are equipped with an InkJet printer that can print an endorsement or other information on the back of a document as it passes through. Banks often require this of their remote deposit customers so that checks and money orders cannot be double-deposited, and it’s also commonly used for various purposes by scanners installed at the teller window.

But while an Inkjet endorser is useful, it creates one big problem: Wet ink in the document track. When you print an endorsement on the back of a check, you naturally also want that endorsement to be in the scanned image – so it’s mandatory that the printing happens before the document reaches the image sensor.

There’s nowhere near enough time for the ink to dry before it reaches the capture assembly – only a few hundredths of a second – which led to two related problems in our prototype models. First, since the checks tend to rub against the plastic housing as they pass, the ink would often smear. Worse, the next check would smear that ink around and add its own — until eventually, there was enough ink accumulated that the checks would drag it across the image sensor glass, making a fat black streak. The checks generally are not supposed to come in direct contact with the glass, but in practice the occasional document does brush against it.

So, the groove was our answer to that. You’ll notice that it’s positioned at precisely the same height as the Inkjet printer. As checks pass through, the fresh ink doesn’t make contact with the plastic housing, it has slightly more time to dry, and it’s generally enough to keep the glass from becoming smeared with ink. (There’s no need for a groove on both sides, as the Inkjet only prints on the back of the check.)

Another obscure component that plays a role in the printing system is the waste ink pad, a dime-sized piece of gauze-like material located immediately opposite the print head (see picture at bottom). Periodically, the Inkjet printer executes a self-cleaning, ejecting a tiny amount of ink to keep the nozzles flowing freely. Without the pad, that ink would simply spill into the track and get all over any paper that passed through afterward. While the waste ink pad rarely if ever wears out, it is, in fact, a replaceable part that can be ordered through our online store. 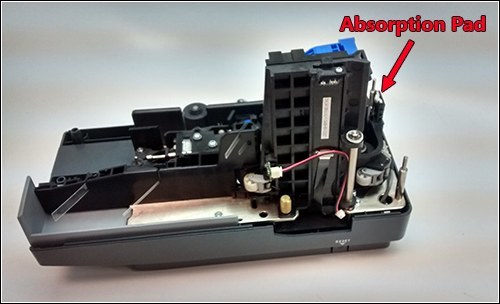 Read More →
January 12, 2023
Back to Blog →
PreviousMission to Mars: The Mariner Probe Model 505 Data Reconstruction Camera
NextU.S. Could Learn a Lesson from India on Card-Not-Present Fraud