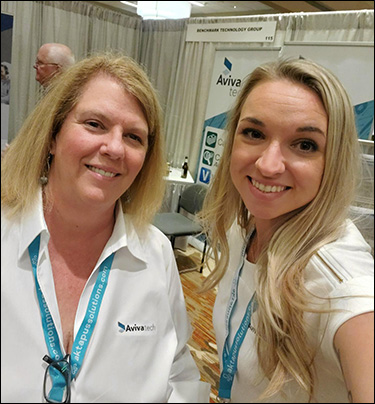 Last week’s launch of our new Avivatech software brand was big news in its own right, but another first nearly got lost in all the excitement. The big reveal of our cash and check automation product line was made in person at the Financial & Security Products Association (FSPA) meeting in Denver – the first live event that we’d attended in more than a year.

The FSPA show is an industry-wide event with a focus on security – although this time, according to our channel sales manager, Danielle Lyles (pictured at right with Avivatech SVP Shawn Kruger, left), security was probably about an equally popular conversation topic among the attendees as the fact that a live conference was happening at all.

“For many people, this was their first time traveling in a year, so of course there was a lot of talk about that,” she reported. “A lot of people talked about being vaccinated, which was probably the big push that allowed the event to happen. Of course, the show was smaller than usual, with about 90 companies attending, and there were all the standard safety protocols in place. For the most part, people were very respectful about them and happy to be back.”

The pandemic naturally led to a lot of conversations about what the future holds for physical bank branches. Some were predictable, such as the fate of the drive-up banking lane: Many banks had them slated for closure prior to last year’s events, but their demise seems to have been postponed indefinitely, or even reversed as some look to expand them. On the other hand, most attendees didn’t see any major overhauls to branch design in the near future, feeling that the incremental measures taken in the short term would probably continue for some time before eventually fading out.

As for long-term branch transformation ideas, the outlook was generally upbeat, with many saying they anticipated their plans prior to the pandemic would probably stay on course, although perhaps delayed by a year or two. While there may have been some selection bias due to the fact that the attendees themselves were all comfortable going to an in-person event, it was nonetheless some positive news in a year that had been full of the opposite.

“Being in the cash automation business, we talked to a fair number of people about branch transformation and Branch of the Future concepts, and people were thinking that it’s eventually going to go back to normal,” Lyles said. “They thought drive-thrus were going away and now they’re not – but long-term, people’s minds were not being changed regarding floor plans inside the branch. The transitional measures that happened will probably remain for a while longer, but there was no sense of any major redesigns coming on the horizon.”

Unsurprisingly, not many new products or services were being announced at the FSPA event. Besides Avivatech’s own launch, a Bitcoin ATM was the only new product making its debut (and, given the timing, it drew a huge amount of attention). Still, the overall tone was positive, with cautious optimism about a return to normalcy the prevailing message. While we’re all still getting used to the idea of going places and meeting people again, it was an encouraging sign, and we’re hopeful we’ll see you again later this year!