If Checks Are Going Away, What’s Taking Their Place?

With all the commotion over e-payments, people’s spending habits have remained remarkably unchanged

Checks took another beating in the latest month’s Federal Reserve Payments Study, which revealed another steep decline in the three years since the central bank’s previous report. Americans recorded 18.3 billion checks paid in 2012, compared with 24.5 billion three years prior – a drop of more than 25%. The latest Fed figures confirm what has essentially been a linear decrease of roughly 6 billion checks per three-year reporting period since 2003.

So, what’s happening to all these check payments? “That’s easy,” you might be tempted to say. “They’re going away. People are all switching to credit cards and mobile.”

Overall, credit, debit and prepaid cards together make up about 5% of total U.S. transactions by dollar value – only slightly more than they did 10 years ago. While the number of transactions is impressive, one way of looking at the Electronic Payments Revolution of the past decade is that it has essentially the taken same slice of the pie and come up with a thousand new ways to pay for it. 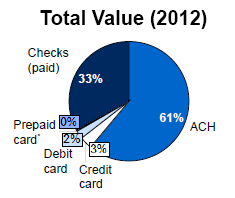 While all of this churning has been going on with cards, online and mobile, the proportion of check and ACH payments by value has remained almost unchanged – from just more than 96% in 2003 to just more than 94% today. What this shows is that despite all the gymnastics, people’s payment needs and spending habits haven’t changed that much over the past decade. Low-denomination personal checks amounting to a couple percent of total transaction value have largely been replaced by cards and ACH, but people aren’t especially making any more or different purchases than they were before.

What does this mean for the future of checks? At the present linear rate of decline, they would disappear entirely by about 2020, but we are likely to see that slow in coming years. By now, a lot of the “system shock” has been absorbed: Checks are seldom used for the type of low-dollar value, high-frequency payments that they used to be. It’s rare to see personal checks at the point of sale anymore, and monthly bills are becoming increasingly automated because – let’s face it – cards and ACH are quicker. What’s left will be higher-value payments where there’s less urgency to convert, and a strong disincentive to convert to cards because of the percentage fees imposed.

A bright spot for checks was that from 2009-12, the number of checks deposited as images actually increased from 3.0 billion to 3.4 billion annually – more than 10% growth “against the grain” of declining volume. Measured as a percentage of overall usage, image-based deposits grew by almost half. If nothing else, managing to post significant growth in the midst of a shrinking market proves one thing: As a technology, remote deposit capture actually works.

It’s hard to say where exactly the decline in check usage will flatten out, but with much of the small-transaction shift accounted for, and the percentage-fee roadblock in place for cards, the future give-and-take will likely be between paper checks and ACH. Remote deposit may well provide the floor for checks in that arena, as the convenience difference between various methods of electronifying them becomes a wash. While it’s easy to point lout reasons why new payments are faster, simpler or just more interesting, the check still has quite a bit of life left.

Read More →
November 3, 2022
Back to Blog →
PreviousBAI Payments Connect: Security is King, but Where Should Your Focus Be?
NextHow RDC Convinced Me to Switch to Branchless Banking