BAI Payments Connect: Security is King, but Where Should Your Focus Be?

The security focus should come as no surprise; card fraud and identity theft have provided a steady background noise in the payments business for years, and the recent spate of high-profile data breaches at major retailers has taken awareness to previously unseen new heights. For financial institutions and their customers alike, “What are you doing about fraud?” is the question on everybody’s mind.

So, if fraud is the issue, where should we be focusing? For banks, the figures from the latest Federal Reserve Payments Study paint one picture … 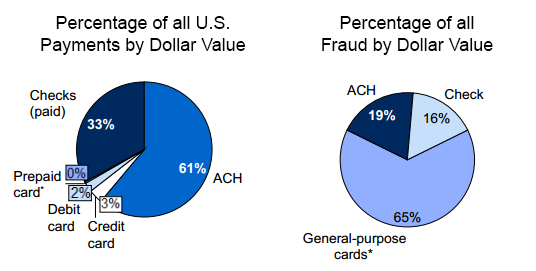 … but for retailers, the numbers point in a different direction (from Minneapolis FRB study, 2012): 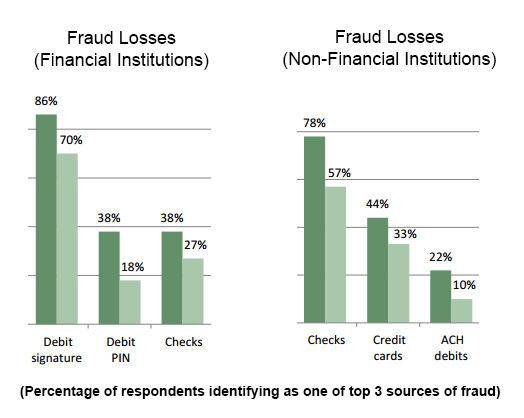 The fact that card transactions carry a fraud risk for banks that is nearly 20 times higher than other transaction types is alarming, but perhaps not surprising; various types of card data theft have been on the rise for over a decade, and this is where the fraud ends up. It was a bit more unexpected to see the check take the top spot for businesses, given their declining usage among consumers.

Where merchants were concerned, the top check fraud methods were fairly crude, with altered/forged checks and counterfeit checks far and away the most common (for cards, online transactions were tops). Financial institutions ranked POS card transactions #1, followed closely by online card purchases.

This suggests that, at the retail level, better physical security presents the most fertile ground for improvement – identifying fakes and putting controls in place to reduce risk for large or suspect transactions. For banks, knowing typical customer behavior and flagging unusual activity is key, though it’s far from the only way to reduce losses. Interestingly enough, almost two-thirds of both banks and businesses ranked lost or stolen physical materials – cards, checks, documents, or devices – as a top source of information used in fraudulent activity, so some customer education would probably go a long way on both fronts.

There was a lot to see at the show, so we’ll follow up next week with more specifics on some of the security tools and tactics we saw on display.

Read More →
January 12, 2023
Back to Blog →
PreviousUSPS’ Plan to Get Into Banking: So Crazy it Just Might Work
NextIf Checks Are Going Away, What’s Taking Their Place?