Where Cash Is not King: Argentina’s Hyperinflation Makes Checks Preferred Over Physical Currency 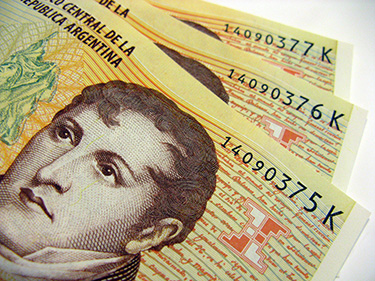 Some strange things can happen when you have 50 percent annual inflation. And strange things have certainly been happening lately in Argentina, where soaring prices (the result of economic missteps by the previous government) have made cash into a liability – leading to what would usually be considered extraordinary spending and payment practices. Most recently, the major Argentine banks began imposing a 1 percent fee for accepting cash deposits starting in March, signaling a clear preference for certain other – or really, any other – means of paying for things.

To American consumers, who are used to receiving discounts for paying with cash, such an arrangement seems absurd. But the reason we see cash discounts is because cash is less expensive than other forms of payment – namely credit cards, which can take a cut of anywhere from 2 percent to 6 percent or more out of each transaction due to interchange and other fees, which are among the highest in the world.

Throw in inflation approaching 50 percent, though, and it’s a different story. Since cash loses about 1 percent of its value every week, it becomes a hot potato — no one wants to be left holding it for long. On top of that, after years of hyperinflation, the devaluation of cash caused some cartoonish scenes, with huge piles of cash often changing hands to complete everyday transactions. (Imagine needing a whole stack of bills to, say, pay for a meal at a restaurant.)

This caused some acute logistical problems for banks and businesses alike – for example, operating an ATM network became an adventure, as the machines had to be refilled constantly to keep up with the rapid outflow of banknotes. But creative solutions arose too: Retail businesses – eager to get rid of the currency anyway – started encouraging customers to make withdrawals at the register, alleviating some pressure from bank-owned ATMs while reducing their own cash stockpiles. The Argentine government recently began issuing new, higher-value banknotes to keep pace with demand, but after years of devaluation, it’s been a slow adjustment and, some have complained, less effective than it could have been because of repeated delays.

So the bottom line is that no one – banks, businesses, or consumers – wants much to do with cash. But while everyone’s trying to avoid hanging on to the physical currency, it has to wind up somewhere, and that somewhere often ends up being a bank. Of course, banks are not the happiest about it (If someone told you one of your investments would lose half its value in a year, would you want to hold on to it?), but neither can they stop dealing with cash if they want to keep their customers.

Thus, it comes to providing a soft incentive to avoid conducting business in cash in the first place. In what had been, up until now, a primarily cash-driven economy, attaching some cost to cash was probably necessary even to get people thinking about paying in other ways first.
While a 1 percent deposit fee may not be much compared with the overall opportunity cost of holding cash, it at least puts it on par with other payment methods like checks and cards.

So it comes as no surprise that our Argentine customers and partners have reported a noticeable surge in other ways to pay – cards for consumers, and checks for business-to-business transactions. While the check was not previously a major form of payment, as a well-documented and more nearly frictionless way of paying, it has been favored over cards for the types of higher-value and “official” transactions conducted by businesses, a phenomenon we’ve also seen elsewhere in the world.

To be fair, cash-deposit fees aren’t the only thing that’s become difficult about finance in the face of massive inflation: Interest rates paid out on deposits are above 20 percent; arranging long-term loans has become extremely difficult, and the amount paid back on a two-year loan might be two and a half times the original amount borrowed. Nobody likes it – not consumers or businesses because of the obvious cost increases and other burdens it imposes on them, and not the banks either, because it’s much harder to do business under those conditions. If all of this sounds stressful, that’s because it is.

Thankfully, there’s a likely end in sight to both the hyperinflation and the extra expenses that come with it. Most agree that the current situation was the result of a fiscal mess inherited from the previous government – including a notorious multibillion-dollar defaulted-debt case that spent several years winding its way through the American court system, and ostracized the country from world financial markets. As the new government resolves those problems and the economy returns to normal, the inflation problem is expected to eventually correct itself.

In the meantime, the practice of dodging cash will continue for a while. And since checks are in a unique place straddling the line between physical and virtual payments, they remain positioned to keep taking up the slack. All involved will certainly breathe a sigh of relief once inflation returns to a more tolerable level, but the situation has provided a rare example of what happens when cash becomes toxic in a cash-based economy.