In case you missed it, May 21 was the global unveiling of the world’s first low-cost ultraviolet check scanner, the CheXpress CX30-UV. It mostly passed under the radar in the U.S. (most banks here don’t employ UV security yet), but for international markets, it was a big deal, lowering the point of entry in UV scanning by two-thirds overnight. Previous UV scanners – from any manufacturer – had all been multi-feed machines costing $1,000 and up, and therefore the exclusive province of banks using them for teller and branch capture. The introduction of a single-feed option brings ultraviolet within reach of the small and mid-sized business, making remote deposit in UV-using countries a realistic possibility for the first time. 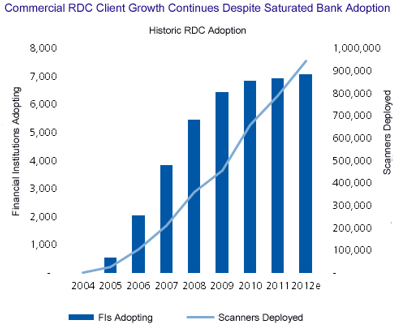 Does this story sound familiar? It should: It’s exactly what happened in the United States several years ago. For its first few years, RDC had struggled to catch on among all but the largest businesses, because the heavy-duty, high-speed “horseshoe” scanners were all that was available, and they were expensive. When we launched the original CheXpress CX30 in 2008, it was an experiment, a bet on the idea that a smaller up-front investment would open the door to millions more potential users. That bet paid off, as banks used the lower cost to come up with all kinds of new ways to sell RDC – free scanners, tiered pricing, mobile phone-style promotions – and generally made it more attractive to their customers. Today, single-feed check scanners make up the majority of new equipment sold to RDC customers.

What does this mean for the future of RDC? In the U.S., just business as usual, since UV is only a specialty product here. But overseas, it shows that remote deposit is poised to make the same kind of jump from high-end niche service to mainstream banking tool that it did in this country in the late 2000s. Perhaps even more so, because there exists not only a price barrier but a technological hard stop: In countries that employ UV security, if you can’t submit a UV image, you can’t use remote deposit – it’s simply not allowed. As more and more countries look to automate their processing of checks, money orders and similar payment documents, the equipment will now be ready to move along with them.

Want to know more about the kinds of things UV lets you do with document security? Wonder why it’s not widely used in the United States? Read our companion article on UV to find out.