[note — If you missed the main part of this case study, CMP: Using Reader/Sorters to Process a Million Mexican Payment Documents a Day, you’re not getting the whole story! Please follow the link above to see the full context of how reader/sorters are used.] 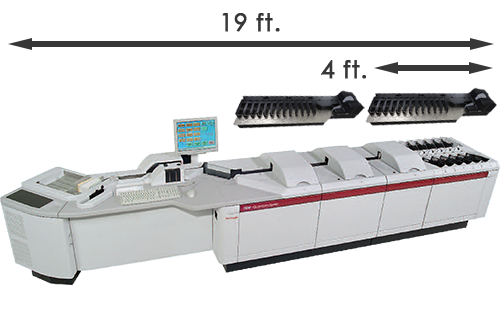 A Quantum DS, while a sizable machine in its own right, is still only a fraction of the size of a full-sized reader/sorter.

Even though the Quantum DS is a fraction of the size (and cost) of a full-size reader/sorter, it’s still an impressive and complex machine. It’s only natural for people to ask us: Instead of one great big scanner like the QDS, couldn’t you use two or three regular desktop scanners to do the same thing?

The answer, unfortunately, is that you couldn’t. Ordinary check scanners, like the ones you’d find in a bank branch, simply aren’t built to take that kind of abuse.

One specification of a check scanner that isn’t discussed very often is its duty cycle – in simple terms, how hard you can use it before you’ll start running into problems. For a regular scanner at a teller window, this might be something like 3,000 documents per day, or 3 million documents in its expected lifetime . This rarely comes up in a bank setting: Even the busiest teller window will almost never come anywhere close to either of those numbers. And even if it did, the documents wouldn’t all be scanned at once.

With large-batch production scanning, it’s a different story. CMP’s reader/sorters can easily exceed a typical check scanner’s duty cycle by 20 times in a day, or a thousand times over its lifetime. Why does that matter?

If you tried to use a standard scanner do that job, the first problem you’d likely encounter is heat. Running a teller scanner continuously for thousands of documents would eventually overheat the motors, if the friction and debris rub-off from all that paper didn’t start causing jams first. 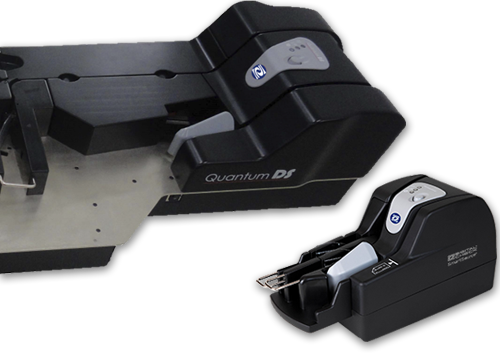 Although the Quantum DS shares some common design features with check scanners in mass production, it is much more durable and designed for near-continuous operation.

Reader/sorters, as well as production scanners like the Quantum DS, are designed with that in mind, so the QDS has a rated duty cycle of 25,000 items per day. (CMP has sometimes ended up testing the limits of the Quantum DS with even higher loads of 50,000 or 60,000 items and up. But, while it can be done, it’s not without its challenges!)

The other main factor in device duty cycles is wear and tear on the components. No matter what you do, eventually a scanner’s sensors and rollers will wear down from contact with the paper; the motors will reach the end of their lifespans, and repetitive stress will wear out moving parts. In production machines like the QDS, not only are those expected lifetimes much higher, but the parts are designed to be easier to replace in the field.

You’ll almost never, for example, run into a situation with the Quantum DS where you have to take the whole machine apart in order to fix a worn-out component – the device was designed from the ground up under the assumption that these parts would eventually be replaced.

A production machine has a double layer of engineering working in its favor: First, that the design is more accommodating for short-term heavy use; and second, that components are easier to deal with when they do wear out in the long term. It makes for a somewhat more complicated device, but for a specialized high-volume environment, it’s well worth it!