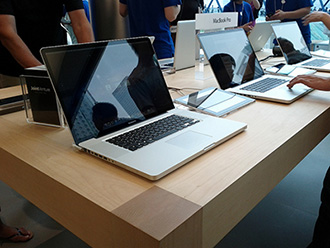 When we announced our API version 12.0 earlier this month, you may have noticed that, for the first time, Digital Check has native OS X® support for our current-generation TS240 and CX30 scanners. As we said in the press release at the time, this was a decision we made in response to a growing desire in the financial community to make remote deposit more accessible to the Apple community. But you might be asking: Why now? (Or maybe: Why did it take this long in the first place?) There really wasn’t a single turning point, but rather a combination of several factors that had been slowly building up over the years.

If you work in hardware or software, or even if you don’t, over the past several years you’ve probably heard a lot of background chatter about OS X eating into Windows’ market share among desktop operating systems. For a long time, Mac’s operating system – starting before it was called OS X – was hanging out at around 3 percent market share, a trend that continued throughout the early 2000s. Then, if you remember back to around 2007-08, OS X suddenly shot up to somewhere between 7% and 9%, depending on which sources you trust. (As some will point out, it was perhaps no coincidence that this happened at the same time Windows Vista® debuted to a less-than-stellar reception.)

At the time, experts and commentators argued over whether this was a one-time fluke, or whether OS X would continue to eat away at Windows’ dominant position and continue well into the double digits. This was also the time when software developers, RDC providers included, began having internal “should we support it?” debates.

As it turned out, the momentum flattened out, and OS X has held at a relatively steady 7% or so of the market since then. In software development, that’s right in the trouble spot for an OS to be: Enough to establish that it’s not going away, but short of the “critical mass” of about 15-20% adoption that leads to widespread support. If you look at the way mobile OS development has panned out, it follows a similar pattern: iOS and Android drawing enough interest for a self-supporting software library, with Windows Mobile and BlackBerry remaining in the game but struggling to make a compelling case why a developer should go to the extra expense of adding parallel support. So it was with OS X – a legitimate and intriguing piece of the market, but just short of having the momentum needed to make it over the hump.

Smartphones and the Future of Banking

Something else was happening around the same time OS X made its market share gain: Smartphones were making their way into the hands of the average consumer, followed a couple years later by tablets. Just as the desktop OS market is a near-monopoly, the mobile OS scene is a duopoly, with Android and iOS running over 90% of devices sold today. Not surprisingly, these two platforms were where mobile banking and remote deposit capture quickly became widespread.

What does this have to do with check scanners? Mobile remote deposit might be growing in popularity, but Android and iOS don’t run desktop systems, and most mobile RDC users aren’t the same people who would pay for desktop RDC. So, other than being kind of silly that you can deposit a check with an Apple phone but not an Apple computer, that wouldn’t seem to have much bearing on check scanning hardware, right?

That’s where it gets tricky. Sure, smartphones, tablets and iOS might be “different” from OS X in a compatibility sense, but at their core they’re all computing in one form or another. They’re separate now, but will they be forever? I wouldn’t bet on it. Take a look at what Microsoft has tried to do with Windows 8, Windows Mobile and the Surface tablet – it all points toward the goal of an interconnected, intercompatible computing ecosystem that encompasses the whole home or office.

They’re not there yet, of course, but the signs are all there too plain to ignore. It’s not like Microsoft is the only one playing this game; Apple is also trying to “conquer the living room”; it’s not uncommon to see Android PCs and gaming consoles popping up either. And as computing hardware itself evolves, the lines between one distinct type and the next will only continue to blur.

As always, there are those who will simplify things by saying, “the desktop computer is going away,” but it’s not as if the need for computing is just disappearing. (By the same token, the public’s interest in news didn’t go away with the decline of newspapers, and the demand for long-distance communication didn’t cease with the end of the telegraph.) So the question becomes: If traditional computers are indeed on the way out, what will take over those tasks, and what will it run on?

That’s where it starts to get interesting. What will be the difference between, say, a tablet and a laptop in five years? Will Apple be well-positioned to take a share of that somehow? It’s hard to say exactly how it will all shake out, but it’s quite possible that being an “Apple user” or a “Windows user” will mean more than just one phone or computer before long. An iPhone and a Windows PC are a common combination, but how many people do you know with an iPad and an Android phone? A Mac and a Windows tablet?

Banks understand this in some form, software companies understand it too, and being prepared for whatever shape the next generations of computing take is going to be essential. But of course, we can make a check scanner with native Mac support, and it will still do no good at all if someone doesn’t also write an RDC program that runs on OS X. That’s what really prompted us to take this step. The decent OS X adoption rates and the many sudden developments in mobile have combined to create a future in which more banks and software vendors want to be ready for Apple as part of their strategy. And the cloud has made it a easier to support multiple platforms, with less code running on the user’s machine and more on the server. The question we’ve been getting asked more and more is: “Do you have hardware that can run on a Mac?” And now, for the first time, the answer is yes.