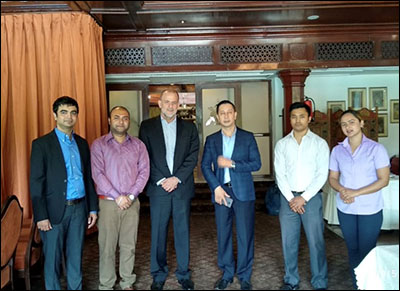 At left, Digital Check’s regional manager for the Indian subcontinent, Ninad Chavan, poses with partners and bank attendees during a break at the seminar on branch automation in Kathmandu.

Kathmandu, Nepal, June 19, 2019 – Digital Check, the world’s largest manufacturer of MICR-enabled cheque scanners, held an educational event for Nepali banks in the capital of Kathmandu at the end of last month. The two-day event, which was co-hosted by local partners Globalis International and Lead Enterprises, was attended by more than 50 delegates from 22 of Nepal’s largest financial institutions. The seminar also served as the official launch of Digital Check’s ScanBox platform for self-service kiosks in the Nepal market.

Besides general branch modernization, sessions were held on remote deposit capture, ultraviolet document security, and ways for automation to supplement the traditional full-service branch. Nepalese banks have been expanding over the past several years, as better infrastructure and telecommunications have given millions of new customers access to the banking system.

“The event was a good platform for all the banks to learn from the best practices within the region. The technology showcased not only caters to the existing branches but provides the banks with flexibility and convenience to expand to remote branches,”. said Amar Rajbhandari, Head of Card and Tech Based Service, Bank of Kathmandu. “We are very keen on expanding our digital branches footprint and providing banking access to the unbanked along with our existing clients.”

Along with the public’s broader access to the banking system, Nepal’s improving infrastructure and technology have changed the ways in which its people do business – a shift that the banks have to account for in their growth strategies.

“In addition to a higher number of transactions, banks in Nepal are dealing with a move away from a cash economy, and toward one in which other payment methods predominate, including cheques and electronic payments as well,” Anil Rajbhandari, Managing Director, Lead enterprises. “Part of this means a general expansion of services, but new technologies and new means of processing payments also play a key role.” 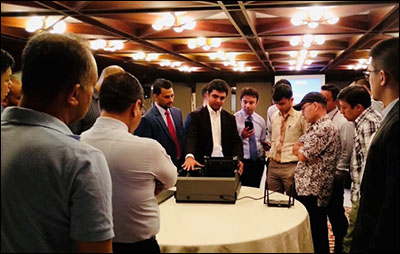 A hands-on demonstration of the ScanBox kiosk platform during one of the breakout sessions at the Nepal branch automation seminar hosted by Digital Check.

The self-service kiosk is one tool that banks in the region have used to address the challenges of rapid expansion at the same time as technological modernization. That was one reason why the event was chosen for the launch of the ScanBox kiosk platform in Nepal, said Ninad Chavan, Digital Check’s regional manager for the Indian subcontinent.

“We have partnered with banks across various markets to deploy several thousand cheque deposit kiosks with great success using our cheque scanners. With Scanbox, we foresee banks will be able to go to market significantly faster with lot of ease and at much lower cost,” Chavan said. . “The technology also facilitates Remote Deposit Capture (RDC), as it reduces the concerns around transaction fraud. Nepali banks have been at the forefront of technology adoption and we are committed to delivering the payment solutions to the market and partnering with banks in this endeavor.” Ninad Chavan, Country Manager, Indian Subcontinent.

Digital Check’s ScanBox made its initial debut at the Paris Banking & Innovation Show at the end of 2016, and employs a touchscreen and a locking metal enclosure to capture cheques securely in an attended or unattended environment.

About Digital Check
Digital Check is the world’s largest manufacturer of check scanners and document capture products for teller capture, branch automation, remote deposit capture, and remote lockbox applications. Digital Check’s award-winning CheXpress®, TellerScan®, and SmartSource® check and document scanners are among the most cost-effective and reliable in the industry. The company also provides software solutions for image quality, vault processing, and remote monitoring of scanners across an enterprise.