The footage captured for a full-length feature film can be quite daunting to go through in its entirety.

It’s an old rule of video production that every minute on the screen takes at least an hour spent in the editing room – and that’s just for the easy stuff. For a big-time Hollywood film, it might be several times that. With possibly dozens of takes, captured by multiple different cameras at once, the amount of raw footage captured for even a single scene is staggering. And in the early days of filmmaking, going through it all took a long, long time.

As you saw if you read the story of our work on the military’s F-4 “Phantom” Flight Simulator, most projectors in the 1960s and 1970s rolled at a single speed, and fast-forwarding or rewinding was neither easy nor precise. That was a big problem when it came time to find the best take out of 20, or piece together parts of a scene from different camera angles.

But by happy coincidence, Digital Check’s predecessor Electro-Optical Mechanisms (EOM), had unknowingly been working on a solution. The film-based flight simulators they’d helped develop for the Air Force used special variable-speed projectors that could stop or reverse directions instantly, with motors powerful enough to turn giant reels of film that held full-length “missions” that might be an hour or more in duration. Those projectors turned out to be perfectly suited for the Hollywood cutting room, where quickly “jumping” back and forth between different angles and different takes was a theretofore unknown luxury. 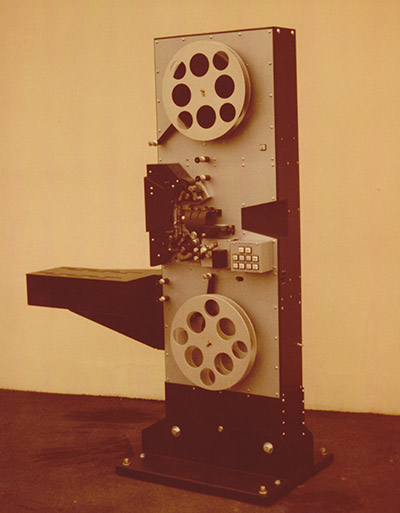 EOM’s editing projectors were some of the most powerful devices of their time, and featured precision control previously unknown to the industry.

The first EOM Model 421 projectors were delivered to RCA (then the parent company of NBC) for use in its Burbank studios, and were both bulky (365 pounds) and expensive ($10,000 or more in 1970s dollars). They sped up the production process so immensely, however, that RCA not only kept buying them, but also licensed the technology and sold the projectors to other production companies under the RCA name.

That was the first, and ultimately most commercially successful, half of the Model 421’s existence. There was also a brief foray into the mainstream market as a possible replacement for the analog movie-theater projectors of the era. Just as with the initial leap from simulators to the silver screen, the big break for the EOM projector line came when someone in the movie business figured out that the one of the same qualities that made the Model 421 a great editing projector would also make it a great theater projector.

As many movie buffs can tell you, back in the 1970s and 1980s, films that played in theaters didn’t come on one big reel; that would’ve been too much for the projectors of the time to handle. Instead, they came on several smaller reels, and it was the projectionist’s job to queue up the next reel and make the changeover as the previous one ended. Besides the complexity and the added chance for something to go wrong, this also meant a highly labor-intensive process where several trained employees might be required to man a single bank of projectors. The EOM devices offered a way to solve that problem with their sheer capacity: Their oversized motor system meant they were among the first projectors that could accommodate a full-length feature film on a single reel and turn it at the proper speed, just as they had for the Air Force flight simulators previously.

The studios tried the EOM projectors in a pilot project at theaters around the Los Angeles area – and for a while, things went perfectly. But then, a funny thing happened: Multiple theaters began reporting a high failure rate with the new equipment. Puzzled, EOM sent engineering teams to investigate. 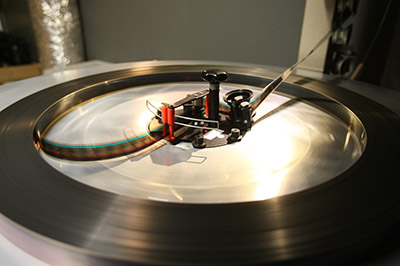 Eventually, “platter” projection systems could accommodate an entire movie on one reel, but the feed mechanism was completely different from that of an ordinary projector.

“What we found,” recalls chief engineer Phil Barboni, “was that all of these machines had teeth broken off from the sprockets on the film transport. But it was impossible to do that by operating the machine – you would tear the film first. It had to be done deliberately.”

“It turned out that the members of the projectionists’ union were afraid of losing their jobs, so they’d been sabotaging the machines by chipping the teeth off. Of course, nobody could prove anything – but I don’t think the studios wanted to get into it with the projectionists. So, that ended the experiment with replacing manual projectors!”

Eventually, the single-reel ideal became possible with the introduction of “platter” systems, which could hold a single oversize reel lying flat, then rewind it on a second platter as it played. These replaced nearly all two-reel projection systems and made it possible for a small crew of projectionists to operate several theaters – a major reason why massive multiplex theaters became possible. But, in turn, platter systems have largely been replaced by digital projectors, and film has mostly become a historical curiosity in the theater business.