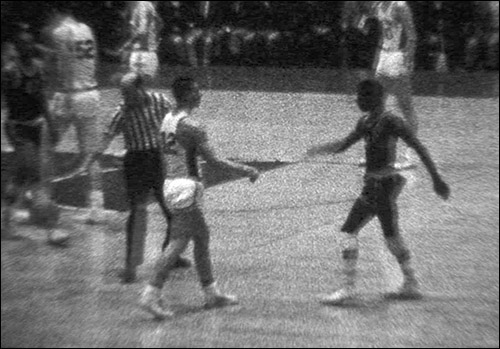 Two players from the New Trier and Marshall High teams shake hands during an intense rivalry game in 1966.

Northbrook, IL, January 11, 2022 – Digital Check Corp. made donations totaling $50,000 in 2021 to the GameChangers 65-66 Foundation, a Chicago-area 501(c)(3) charitable foundation that serves local youth sports and deserving community-building initiatives. Two separate $25,000 gifts approved by the company’s board of directors made Digital Check the inaugural corporate sponsor of the foundation, which recently celebrated its fifth year in existence. Digital Check’s CEO, Thomas P. Anderson, has also made more than $50,000 in personal contributions to the foundation over the past two years.

GameChangers is a collaboration between former members of the Marshall Metropolitan High School (Chicago) and the New Trier (Winnetka, IL) basketball teams, who in 1965 and 1966 met twice in racially-charged matchups in the Illinois state backetball playoffs. The all-Black Marshall side and the all-white New Trier team were each victorious once.

In 2016, surviving members of the two teams, along with coaches, radio announcers, and fans, reunited to commemorate the 50th anniversary of the games. The reunion led to a documentary film about their experiences, and to the establishment of the GameChangers Foundation as a means of giving back to the community and sharing their message of mutual respect.

Anderson, the Digital Check CEO, participated in both the 1965 and 1966 games as a player for New Trier. Since the reunion, the film and the foundation’s mission have become a personal passion, he says.

“At a time in this country when there is so much racial tension, the making of this documentary has been one of the most rewarding accomplishments in my life,” Anderson says. “At the heart of the successful completion of this project, was the trust that the individuals involved put in each other. Players who had not seen each other in 50 years – and only then in a couple of basketball games – Black and white, had to shake hands and trust each other as the film developed. The result speaks for itself, because as Brad [Marshall’s Richard Bradshaw] says, ‘we all bleed red’.”

Since its inception, the GameChangers Foundation has distributed more than $75,000 in scholarships and grants, primarily to the Marshall community on Chicago’s West Side. It remains committed to assisting deserving individuals and organizations that work to build bridges between communities in the Chicagoland area.

About GameChangers:
The GameChangers film is a 77-minute documentary that tells the story of a historic rivalry between two high school basketball teams that crossed deep racial and socioeconomic divides – and how the experiences shaped the lives of those involved forever. It debuted in 2018, and has been broadcast on television stations in the Chicagoland area, and shown at several independent film festivals in the Midwest.

The GameChangers Foundation was established in 2018 to recognize deserving individuals for their community-building efforts, and to promote a message of respect. Each year, it awards scholarships to several high school seniors from the schools involved in the rivalry, and funds worthy organizations doing work in the community. Learn more at www.gamechangers.film.

About Digital Check
Digital Check is a leader in the payments and digital imaging space, with a reputation for reliability in check scanners, microfilm readers, and cash automation. The company’s CEO, Thomas P. Anderson, is a lifelong resident of the Chicagoland area, as well as a former player for the New Trier basketball team and an active participant in the GameChangers story. Digital Check is headquartered in Northbrook, IL.