Many of our Canadian customers – and our customers in the northern United States – have long been asking when it would be possible for checks (or cheques, depending) to be cleared electronically across the border.

It’s something that everyone has wanted since Canada’s new clearing system launched in late 2014, but which – as we explained in this article written at the time – was not immediately possible, thanks to a few hangups in getting the two systems to work nicely together. For quite a while after the Canadian system went live, the final settlement of payments still involved physically sending paper checks back and forth across the border, in a process that could take several days or even weeks.

Fast forward to 2018, and fortunately, there’s been some good news in the meantime: The banks and software providers have worked out the problems, and for the past year or two, most checks have been zipping across the border electronically. While your ability to do this as a consumer may still depend on your individual bank, in general it is now possible. Overall, the process has sped up dramatically.

What was the reason keeping American checks from working in the Candian system, and vice versa? Actually, there were several. 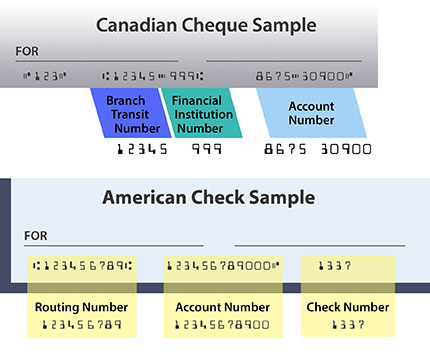 One problem (which we touched on in the original article) was the formatting used by Canadian and American checks. As you can see in the example at right, the information contained in the magnetic ink, or MICR line, at the bottom of the check is arranged slightly differently.

This actually turned out to be a relatively easy problem to solve, at least on the scanner side: While the visual layout might look somewhat dissimilar, the only technical difference is a dash in the Canadian routing number. So the engineers figured out pretty quickly how to make scanners recognize either format.

The next hurdle turned out to be a language barrier: Canadian cheques might be written in either English or French, but most software could only read one language at a time. That was especially problematic for Optical Character Recognition, or OCR, engines, which are the programs that read handwritten letters or numbers and decide what they are. If a cheque was written in French (or any language besides English), it would simply be rejected as an error. This was a major issue for a country in which more than 40 percent of the population speaks something other than English as a first language.

Once that was figured out, a few more technical challenges still remained. Different file formats, varying rules for the handling of errors and returned (bounced) checks, and of course, currency conversion, were all problems that had to be dealt with. From a programming perspective, none of this was trivial – so it makes sense in hindsight why cross-border image exchange wasn’t happening from day one.

While we’re on the subject, another lesson about the Canadian market – one that many American companies have learned the hard way – is that you cannot deal with it from a distance. That means two things: First, simply that importing items into the country takes time and costs money. So, sending goods back and forth from the United States is not a realistic option for dealing with individual orders, exchanges, or repair requests. You need to have everything already present inside the country and ready to go. 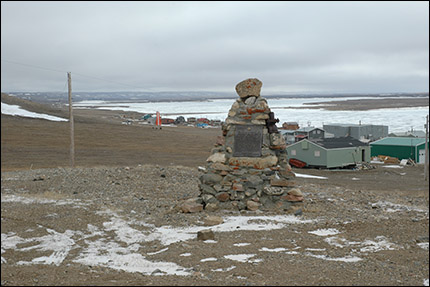 That’s a big reason why we work with an extensive network of Canadian companies for fulfillment and service on our products for customers there. If we tried to do it from across the border, a simple request might take weeks, or it might become so expensive as to be completely impractical. Customers won’t put up with that kind of time, cost, or uncertainty for long.

The other aspect of this is Canada’s immense geographical size. It’s one thing to look at on a map, but few people understand how truly vast the distances involved can be. On the one hand, it’s good news for electronic cheque clearing because the amount of time and costs saved (compared with transporting the physical paper) is tremendous. On the other, you have a good number of isolated communities that are … 200 miles from the nearest paved road, for example. How do you do business in a place like that? It’s like nowhere else in the world.

Fortunately, we’ve found partners who have uniquely Canadian solutions to these problems. It would be impractical to have a full-time employee in, say, Norman Wells, Northwest Territories, or Baker Lake, Nunavut, to deal specifically with banking equipment. Instead, they’ll have a local person with some IT knowledge who can be contacted as needed to do troubleshooting and repairs; and they’ll have some spares located around the country within a day’s travel of just about anywhere.

All puns about “remote” deposit aside, what this means is that you cannot just go into Canada – or any foreign country – and just “wing it” and expect things to work out. Getting the electronic clearing clearing system to really work was a huge effort, not just on our part, but by dozens if not hundreds of banks, software companies, IT departments, logistics departments, and hardware distributors. We’re proud to have been a part of bringing such an amazing system to life.