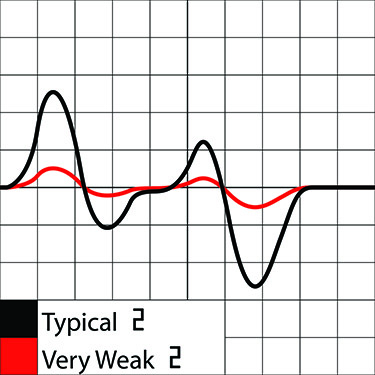 A can’t-read is a term that refers to a MICR character that is unreadable when scanned, and produces an error. This is not to be confused with a misread, which happens when one character is substituted for a different character.

MICR can’t-read errors may occur for a variety of reasons — one of the most common causes being the use of magnetic ink that is too weak. (Laser printer toner, for example, has about 20 percent as much magnetism as proper “in-spec” magnetic ink.) When this happens, the result can be a magnetic signal that is unrecognizable as a standard character, as in the example at right.

Other causes of can’t-reads may include feed errors such as improper alignment (skew) and inconsistent speed, physical damage to the check, or a worn-out magnetic read head on the scanner.

Can’t-reads are generally a nuisance, in that they will stop the scanning process and require the operator to re-scan or manually enter the correct number – however, they are much less likely to result in the kinds of severe errors caused by misreads or double-feeds.