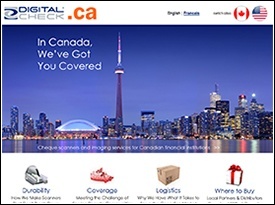 “The adoption of image-based clearing in Canada is a very encouraging sign, not just for the financial institutions there, but for RDC and truncation as it continues to be rolled out in other countries worldwide,” said John Gainer, Digital Check’s executive vice president. “It took several years to realize widespread adoption in the U.S., where the system was still under development as it was being implemented. By contrast, those implementing it now are finding a mature technology that is already somewhat familiar, and so the time to market has been much faster.”

With an estimated 1 billion cheques written annually, Canada remains one of the biggest users of cheques after the United States. Along with the United Kingdom and Brazil, it is one of several large cheque-using nations that has recently added, or is in the process of adding, electronic clearing in an effort to improve its settlement process.

“While overall cheque volume may be declining worldwide, we are finding that those places with significant numbers of them are deeming it worthwhile to automate the settlement process,” said Gainer. “We are excited to play a part in unlocking the full potential of this time- and cost-saving technology in many more places around the globe.”

Digital Check is exhibiting now through Wednesday at the AFP Annual Conference in Washington, DC, at booth #1747.