When we open a new electronic device, we’ve all become conditioned to expect various pieces of protective tape, stickers and pull tabs to be included in the packaging; it’s a natural reaction to want to pull them all off immediately. But be warned – you absolutely do not want to do this with a check scanner. 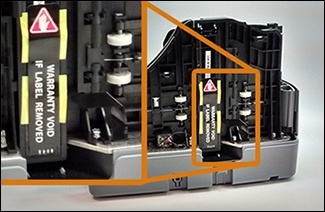 Digital Check does not include any of these “extras” with our devices, apart from the obvious external packaging. And to be 100 percent clear: There is never, ever anything underneath the cover that needs to be removed prior to use. Nonetheless, we occasionally receive support requests or returned devices from customers whose scanners are not working after they removed the cover and pulled off a piece of “tape” on the side panel.

Unfortunately, that’s not a piece of tape. What these unlucky users were actually doing was ripping out the cable that connects the image sensor to the scanner’s mainboard. Needless to say, this voids the warranty. Depending on exactly how the cable broke away, this could mean anything from a quick call to the support center to an expensive repair or even replacement of the entire scanner. Over the years, we’ve tried using various warning labels to caution against pulling on the cable, but the natural urge to do so is still strong.

The main symptom you’ll see from a disconnected cable is a big one: Every image of a scanned document will be completely black. This is because the rest of the scanner is operating normally, and is actually scanning the document, but is receiving all null data from the image sensor output. At this point, it is strongly recommended that you contact Digital Check’s support team. 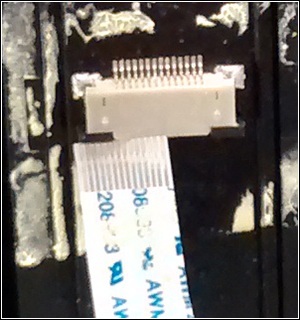 If you’re lucky, all that happened was that the ribbon cable pulled free from the top connector (see right), in which case it’s possible to re-insert by hand. The black plastic fastener at the bottom of the connector pulls down by about a millimeter to unlock, and snaps back up to lock. In this case, the problem can be fixed by unlocking the fastener, re-inserting the cable, then re-locking it.

You’re also lucky if the only damage occurs above the scanner’s metal baseplate, where you can see it (and access it). The image sensor cable continues down below the baseplate, where it attaches to the mainboard with another similar connector. If it pulls away from the bottom connector on the mainboard, that’s a much bigger repair job that you probably can’t do yourself – the whole baseplate has to be unscrewed to get at the components underneath. In the worst case, the mainboard itself can be damaged, which means you’re probably looking at a new scanner.

This accident most frequently happens with our CheXpress CX30 scanner, since the top cover comes off in one piece to reveal the entire inside of the device. Although the TellerScan TS240 has a similar cable, this problem occurs less often: The scanner’s external shell has two pieces, a center cover and an outer cover – and the outer cover (which conceals the image sensor cable) is seldom removed. Regardless, underneath the cover of a scanner, it’s best to remember the old rule: If you aren’t sure what it is, don’t touch it!