Are bank branches coming back? Why there is light after COVID-19

It’s 2020’s biggest question in retail banking by far, and by now you’ve likely read dozens of industry articles asking it in one variation or another. In fact, what other question is there?

What will bank branches look like in a post-COVID world?

From today’s vantage point, it’s almost incredible to think about what the “Branch of the Future” meant just a few short months ago – open floor plans; increased face-to-face interaction; and all sorts of bells and whistles to entice the customer to “hang out” inside bank branches that hardly looked like branches at all.

Now, obviously, those plans have shifted drastically: Instead of asking, “How can we reinvent the branch to be more engaging to the customer?” now it’s, “Will customers even want to engage with us in person?” and, “Will their habits ever return to normal?” Taken to the extreme, a popular stance among digital banking advocates lately has been: This is it — physical branches are done for good. Without rehashing every hypothesis that’s been publicly floated, the sentiments so far can be said to fit into three general categories, from most to least disruptive …

1. They aren’t coming back. Now that customers have had their hands forced, they’ve migrated online and found that it isn’t that bad. Many locations that were closed will stay closed, except for skeleton branch networks to handle unavoidable in-person interactions.

2. They’ll re-open, but they’ll be different. Automation will rule, as customers avoid all but essential in-person transactions. Staffs will be smaller, and some locations will close or be downsized to smaller facilities to reduce overhead. Branch networks will become leaner and more efficient, because they’ll have to be.

3. They’ll be much like they were before, but it’ll take time. Eventually, consumer behavior will return mostly to normal – but at what level, and how long will it take? This may the least talked-about option of the three, simply because it’s not exciting or different, even if it might be the most likely. Remember — this IS what currently exists, and inertia is a force to be reckoned with. Under this assumption, banks would mostly be deliberating over what level of in-person service to re-introduce, and on what timescale.

The end of brick-and-mortar? Not so fast. 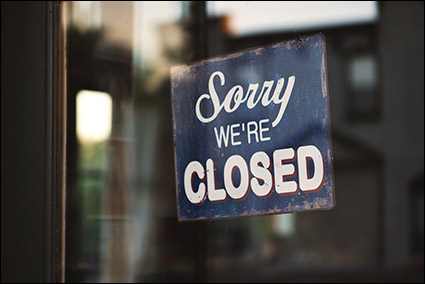 It’s highly likely that, eventually, consumers will want the same things that they always did, and that they’ll return to their old habits in large numbers. But the key is eventually. How long will it take, and how many will return? That’s the million-dollar question, and it will determine which of the three predictions above is most correct.

It can be difficult at times to imagine a “post-COVID world.” That is to say, it’s not as if we’ll turn on the news one day and hear that everything has gone back to normal all at once. All of the various ways a return to normal might play out could easily fill a book – and they might look very different in different places – so for the purposes of this article, we’ll focus on the first theory. Are branches coming back at all?

To be frank, we feel that assertion offers more shock value than it does anything else, because it requires too many assumptions in the negative. Is it really as simple as saying that the only reason why people were still visiting branches was because they were just too stubborn to do anything else? Were those customers being inefficient just because they were irrational and they were all doing it the wrong way? And now that all those stubborn, irrational customers (millions of them!) have moved online for a few months, will they all see the light?

Clearly, that’s an extreme way of putting it, but hopefully it shows why assuming that “branches are going away” is jumping the gun. To be sure, online services will enjoy heightened user numbers for some time to come, and some of those users may indeed undergo long-term changes in behavior. It’s not as if all the pieces will just fall right back in the box, exactly where they used to be.

Perhaps a more useful approach to the question is not to ask what ought to be driving customers away from physical branches. Effectively, we would just be trying to predict how long COVID-19 will last, or how long the public fear will last; and, as the past several months have shown, both are anybody’s guess. Rather, we should be asking what was bringing customers to the branches in the first place, and whether the previous balance between physical and digital is likely to continue (or if not, what might reasonably take the place of certain in-person services). After all, this is a big chance to hit the “reset” button, for banks and customers alike. From there, we can figure out what’s going to be different.

Well, as it turns out, the most important service offered by bank branches might be simply … being branches. According to this 2019 study on bank customer behavior, most customers weren’t using branches very often to begin with. Fully 82 percent said they visit branches just a handful of times per year – one to two times a month, or even less. Yet, at the same time, having a branch nearby was far and away the most important factor in choosing a bank, garnering more than triple the positive responses of anything else.

Naturally, that raises the question: If branches were so important to people, what were they doing while they were there?

Were consumers really just stuck in a rut?

Here is where branch usage can be cleanly divided into two distinct categories – the purely transactional, and the interactive. Let’s start with transactional visits, which are, of course, the “routine” trips in which the customer’s goal is simply to make a deposit or a withdrawal, almost always involving checks or cash. One or the other of these functions still takes place in the majority of in-person branch visits. How likely is it that we could provide digital alternatives to those?

For checks and currency, such an alternative has already existed for a long time in the form of the ATM. (Remote deposit capture, or RDC, is another possibility for check deposits, but for simplicity’s sake, we’ll say an ATM does the job just as well.)

Thanks to ATMs, it could reasonably be claimed that – with the exception of transactions involving coins – there has been no reason for most customers to venture inside a branch to make a deposit or withdrawal for almost 50 years now! This is important for more reasons than one. Namely, it means that almost every single bank customer today either grew up with ATMs, or saw them introduced by the time they were in their 20s or early 30s.

When discussing digital banking services, “resistance to change” among older customers is commonly cited as a primary reason why adoption is not universal — and the same stereotype is often used to explain in-person branch visits as well. Tech-savvy millennials lead the way in trying new technology, while older customers remain set in their ways. But does that argument truly hold water? On the contrary, there should be little, if any, resistance to change with ATMs: Today’s elderly customers were yesterday’s “millennials” when the ATM started becoming a fixture at local branches. On balance, they should be as familiar with ATMs as anyone else. And it’s not as if ATMs have been ineffective at taking over the transaction load; they have proven incredibly popular.

For some reason, though, the in-person transactional visit has persisted to a degree – despite fifty years in which a very simple and effective form of automation has had a chance to extinguish it. People have every chance to use an automated method to execute a deposit or withdrawal, but still sometimes choose not to. Without getting into exactly why (that could easily fill another entire article), we will just say that whatever reason was causing people NOT to use the ATM every time must have been a pretty good one.

In other words, unless people’s main purpose for visiting branches really was to stop in for frivolous chit-chat with strangers (would you wait in a line for that?), it’s likely that whatever was causing them to prefer banks with nearby locations before will continue to do so at some point in the future. If we trust this assumption, at minimum, it’s safe to assume that a good chunk of that transaction volume will return; and so will the demand for locations.

The problem is, how much faith can you put in that reason, when no one’s ever been able to identify it with any certainty? After all, as we’ve mentioned above, there are all sorts of logical reasons why customers shouldn’t care how close the nearest branch is; yet, the behavior persists. This is not a revelation – it’s been debated, at length, for decades, but without a conclusive answer other than the speculative and psychological.

Making sense out of it all

So, we have found the inflection point between the “branches are going away” advocates and the “branches will return” crowd, which is approximately:

a) We don’t fully understand why people behaved this way in the past, so it’s safe to assume this was the event that will make them stop now; or

b) Since we don’t fully understand why people behaved this way in the past, we don’t know whether this event will change their behavior in the long term.

For example, what if the main driving force behind consumer preference was not a utilitarian analysis of how often they will be using the nearest branch, but instead a worst-case analysis of how far away the branches are on those infrequent occasions when they DO need one? What if – counterintuitive as it sounds – a branch’s biggest underlying value to a bank is not in the number of visitors it receives or in how many transactions it processes, but in the number of customers and accounts it passively maintains, just by being there? As simplistic as either of those hypotheses may sound, you wouldn’t want to guess wrong if one of them were true.

For that reason alone, we expect most banks to, at minimum, take a “wait-and-see” approach before deciding to permanently shrink their physical footprints. A bank that sees the pandemic as a big opportunity to pare back its branch network may well be in for an unpleasant surprise later, if it bet the company on it while its competitors didn’t. After that “trial period” winds down — how long, 6 months? 12 or 18 months? Longer? — then we may start to see some changes in branch coverage, as well as in what the individual branches look like.

We’ll explore that in a bit more depth in our next article – but for now, the important part is that the routine visits alone, as well as the simple flag-in-the-sand value of a branch, are probably enough to justify a continued physical presence. The other, more complicated customer visits cement that need even further – but, they will also shape what that presence looks like on a finer level; they are your opportunity to stand apart.

Does the continued existence of branches mean everything will end up the same as it was? Of course it doesn’t. Should branches look the same, or be the same size, as they were before? Not necessarily. This may be a great opportunity to separate the wheat from the chaff – but if we’re wondering what will drive people back to the branch, the answer is: The same things that were bringing them there in the first place.