Winter storms brought out creativity, but beware of other pitfalls

This winter’s storms have caused a lot of bank branches to shut down during the worst weather, and financial institutions large and small have been looking for creative ways to keep their customers updated. Besides the standard online channels like email advisories and the corporate website, many have been using Twitter to inform the public of closures, as detailed with several examples in this American Banker article.

But while Twitter is a popular customer announcement tool because of its up-to-the-minute speed, how effective is it as a means of mass customer communication? Wells Fargo – one of the banks used as an example by American Banker – boasts a sizeable following:

However, for a bank that claims over 70 million customers, those 76,500 Twitter followers represent just over 0.1% of its overall customer base. TD Bank, another example given in the article, maintains a legion of 22,800 followers out of 11 million total customers, for a slightly better 0.2% penetration. This pattern holds more or less true across the industry, with small and mid-sized banks garnering anywhere from a few dozen to a few thousand followers. For that matter, our own Digital Check Twitter feed cruises along at a couple hundred followers, out of a few hundred thousand recent customers overall.

On the other hand, more than 60 million visitors go to wellsfargo.com each month, and Web traffic estimators place the monthly traffic for tdbank.com just shy of 8 million – in both cases, more than 70% of the number of total customers. Of course, that doesn’t account for repeat visitors and other inflationary factors, but it’s hard to argue with 700 times more traffic.

But enough about how Twitter isn’t all it’s cracked up to be. Let’s look at an example of how it CAN create value: 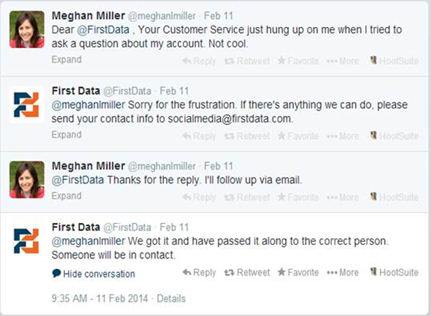 You know how you have those friends on Facebook who are ALWAYS posting a picture of their latest hiking trip, or telling their partners how much they love them? “It’s not about actually being happy – it’s about other people SEEING you be happy,” the social media cynics say.

Here we’ve turned that right on its head: It’s not that you just helped one customer solve a problem, it’s that your 10,000 followers SAW you help solve a problem. And since “real” stories carry a lot more credibility than a sales pitch, this is where you start reaping benefits with bonus multipliers. The Internet has given customers a much greater voice in the form of the online review – whether it be on Yelp or Foursquare, the comments at the bottom of an article, a personal blog, or elsewhere. And the typical person who’s active on Twitter is much more likely than average to also be active on other social media. So what you’re doing with Twitter service is preventing one of these:

..and replacing it with something positive or at least neutral, which will in turn be seen by dozens of others. Suddenly, that 0.1% is multiplied many times over into a significant proportion. Help the most vocal, and they will help you.

Of course, there is also the matter of knowing who your followers are. People appreciate useful information and good service, but some people are just not going to be in the mood for a sales pitch. So as a final example, we’ll leave you with this exchange after a tweet by one of our followers who was trying to promote credit unions (warning – foul language):